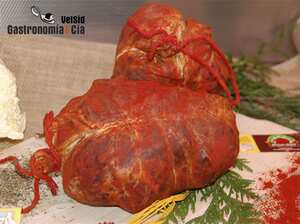 Botillo del Bierzo is a Spanish IGP sausage prepared with different cuts of pork, especially the ribs and tail, chopped, seasoned with salt, paprika, garlic and other natural spices which filled into a pig's intestine, then smoked and semi-cured. It is normally eaten cooked. The production area comprises numerous municipalities in the area of El Bierzo (León).

The Botillo must have the oval shape of the intestine and be brilliant red in colour. It should weigh between 500 g and 1.6 kg, have firm a consistency and an intense aroma of seasoned and smoked sausage. Once the product is cooked and ready to be eaten, the predominant odour is one of cooked and cured lean pork and of natural spices, the texture being non-homogenous, fibrous and succulent.

The lean pork from the ribs and tail of the pig is filled into the intestine in proportions of rib meat, minimum 65 %, maximum 90 % and tail meat, minimum 10 %, maximum 20 %. The following may, at the discretion of the manufacturer, be added: tongue, jowl, shoulder and chuck, up to a maximum of 20 % of the total parts, with none of these components making up more than half of this 20 %. The preparation and curing process takes at least five days and comprises four stages:

There are records dating back to pre-Roman times that refer to the keeping of pigs in El Bierzo, but it is only in the Middle Ages that more and more documentary evidence is produced. The local monasteries testify to the abundance of pigs in El Bierzo. The term Botillo comes from the latin Botellus, which means small sausage, black pudding or salami. However, it also means the sausage casing, ie. the intestine of the pig into which the meat mix is filled. Marco Gavio Apicio, in his De re coquinaria, gives the recipe for the Botillo which testifies to the Roman origin of the sausage. After the discovery of America, paprika began, in the 17th century, to be cultivated in El Bierzo and this led to it being used subsequently as one of the main ingredients in the preparation of the Botillo. The first definition of the Botillo del Bierzo comes from D. Antonio Fernández y Morales, who, in his Ensayos poéticos en dialecto Berciano (Poetic essays in the Bierzo dialect) written in 1861, describes it as a large and small intestine filled with bones and meat of pigs, seasoned with large quantities of paprika, prepared for slaughter feasts. There are numerous references in the 20th century to the gastronomic qualities of Botillo del Bierzo and to the custom of it being served mostly on festive occasions. The Botillo continues to be a favourite dish at festivals, banquets and gastronomic events in El Bierzo. Some products that are similar to the Botillo del Bierzo and are produced in neighbouring regions do not contain paprika because the tradition of growing peppers does not exist there.

El Bierzo region is situated at an altitude ranging from 340 metres to 2 117 metres above sea level and is in the shape of a rift valley surrounded by mountains. The mountain range around the plain provides the firewood, wood of oak and holm-oak used for the smoking of the botillo. The traditional production of the botillo in El Bierzo is directly linked to the availability of this wood. The climate is determined by the combined influence of the Atlantic and the Mediterranean. North-westerly winds reach the rift valley and this explains the link with Spain's wet zone. The mountain range around the plain is responsible for temperatures that are more favourable than on the Meseta. This explains why the Botillo is subjected to the process of smoking, the climatic conditions making it difficult for it to be dried as a result of temperature and air alone.