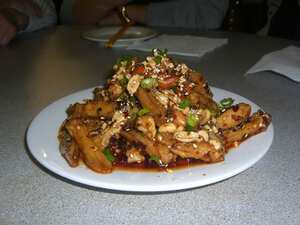 The tongues of some animals are consumed and sometimes considered delicacies. In America and the United Kingdom, cow tongues are among the more common. Hot tongue sandwiches are frequently found on menus in Kosher delicatessens in America. In the UK, tongue can often be found at the local grocer's, butcher's or supermarket meat counter where it is often sold in reformed slices of meat after being pressed (but not minced, ground or cut up in any way) in a device somewhat resembling a cheese press. A popular dish used to be 'Tongue in Aspic', beloved of the Victorians and Edwardians.

Taco de lengua (lengua being Spanish for tongue) is a taco filled with beef tongue, and is especially popular in Mexican cuisine. Tongue can also be prepared as birria. Duck tongues are sometimes employed in Szechuan dishes, while lamb's tongue is occasionally employed in continental and contemporary American cooking. Fried cod tongue is a relatively common part of fish meals in Norway and Newfoundland.