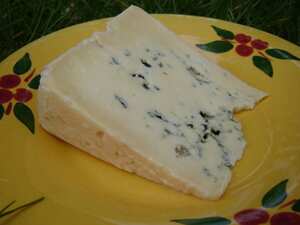 Bleu des Causses is an AOP French blue whole cows' milk cheese in the form of a flat cylinder weighing 2.3 to 3 kg.

Rouergue, with two extensions: the Quercy causses (limestone plateaux) to the west and the Lozère causses and part of the Margeride granite massif to the east. The typical characteristics of Causses blue cheese are closely linked to the nature of the region, which consists of rocky, dry, limestone plateaux, and its singular, slow ripening in a natural environment, usually genuine caves arranged in karstie cavities and ventilated by currents of cool, damp air.

The Causses blue cheese's origins are as old as those of Roquefort. The rural inhabitants of the causses customarily placed their cows' milk cheeses in natural cavities in the limestone scree. These cavities faced north and were swept by drafts of cool, damp air. This cheese was first called 'Bleu d'Aveyron' and defined as such by a décret in 1937. Then, under the name 'Bleu des Causses' it obtained a designation of origin by a Millau court ruling in 1953 that was confirmed by the décret of 21/05/1979.

Causses blue cheese is made by traditional methods: whole milk, generally unpasteurised, is curdled at 30C; the curd is cut and stirred, then placed in moulds perforated with holes. After the cheese is seeded with Penicillium mould, it is allowed to drip, salted, brushed, then stabbed with needles to allow the mould to grow under the effects of the cave's cool air. The ripening takes from 3 to 6 months, with a 70-day minimum.