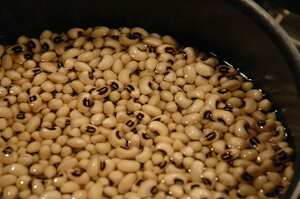 The black-eyed pea, also called black-eyed bean or blackeye, is a subspecies of the cowpea, which also includes catjang and the yardlong bean and is grown for its medium-sized edible bean. The bean mutates easily, giving rise to a number of varieties. The common commercial one is called the California Blackeye; it is pale-coloured with a prominent black spot. The currently accepted botanical name is Vigna unguiculata subsp. unguiculata, although previously it was classified in the genus Phaseolus. Vigna unguiculata subsp. dekindtiana is the wild relative and Vigna unguiculata subsp. sesquipedalis is the related asparagus bean. Other beans of somewhat similar appearance, such as the "Frijol ojo de cabra" ("Goat's eye bean") of Northern Mexico are sometimes incorrectly called "black eyed peas" and vice versa.

Black-eyed peas are traditionally eaten on New Year's Day in the American South and in some other parts of the U.S. In some areas, they are served as a starchy side dish, cooked with or without side meat, bacon, ham bones, fatback or another pork product and/or diced onion, and often served with a hot chili sauce or a pepper-flavoured vinegar. In other areas, they are served in a traditional dish called "Hoppin' John" (or "Skippin' Jenny" if served as leftovers), made of black-eyed peas cooked with rice, sometimes pork (such as hog jowls, ham hock, side meat or fatback), and seasonings.

How to cook black-eyed peas in a pressure cooker