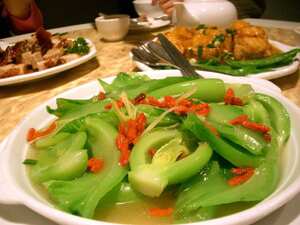 Brassica juncea, also known as mustard greens, Indian mustard and leaf mustard, is a species of mustard plant. Sub-varieties include Southern Giant Curled Mustard, which resembles a headless cabbage such as Kale, but with a distinct horseradish-mustard flavour. It is also known as green mustard cabbage.

The leaves, the seeds, and the stem of this mustard variety are edible. The plant appears in some form in African, Indian, Chinese, Japanese, and Soul food cuisine. Cultivars of B. juncea are grown as greens, and for the production of oilseed. The leaves are used in African cooking, and leaves, seeds, and stems are used in Indian cuisine. B. juncea subsp. tatsai which has a particularly thick stem, is used to make the Indian pickle called Achar , and the Chinese pickle zha cai. The mustard made from the seeds of the Brassica juncea is called brown mustard. The leaves (Raai / Rai in Gujarati) are used in many Indian dishes.

Brassica juncea is more pungent than the closely-related Brassica oleracea greens (kale, cabbage, collard greens, et cetera) and is frequently mixed with these milder greens in a dish of "mixed greens", which may include wild greens such as dandelion. As with other greens in soul food cooking, mustard greens are generally flavoured by being cooked for a long period with ham hocks or other smoked pork products. Mustard greens are high in Vitamin A and Vitamin K.