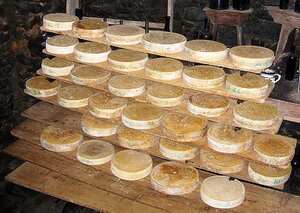 Definition: Bitto is a full fat, semi-cooked cheese with natural acidity from fermentation

Characteristics: It is cylindrical in shape, with flat faces and a diameter of 30-50 cm, and straight or slightly concave sides, 9-12 cm high; its weight ranges from 8 to 25kg. Ripening can be medium (2-6 months) or long (1-2 years or more). After medium ripening, the crust is smooth, thin and yellowish; the paste is compact, straw white in colour with even, fine holes, like a birds eye pattern. As it ages the paste becomes more compact, crumbly and melting to the palate, golden yellow in colour; the crust gets thicker and takes on a darker colouring, while the eyes fill up with a dense, very tasty liquid. Its flavour, sweet and delicate in the young cheese, becomes more intense with ageing. Any addition of goat's milk accentuates its characteristic aroma. With 3-4 years' ageing an excellent product is obtained, but the ageing process may continue for up to 7-8 years.

Area of production: Produced in the entire province of Sondrio and the areas bordering the following Communes of the Alta Valle Brembana in the province of Bergamo: Averara, Carona, Cusio, Foppolo, Mezzoldo, Piazzatorre, Santa Brigida and Valleve. These define an area with particular environmental characteristics.

History: The raising of livestock and, as a consequence, the making of cheese, has always been an important factor in the economy of the Valtellina. The presence of extensive pastures has brought about a seasonal migration in the traditional production area, from the highest elevations in the spring and summer to intermediate elevations in the fall. In particular, over time the cheeses from the Alps have been differentiated into distinct, characteristic types, which are a product of the natural mountain resources, handed down through local traditions over the centuries. The name Bitto appears to be derived from an ancient Celtic word for a type of Alpine cheese coming from the valley of the same name. Breeding method

The cheese is produced using traditional methods, connected with the environmental characteristics, during the period between June 1 and September 30. The natural factors are connected with the environmental conditions of the production area, which bring about a more or less even climate, favourable for the growth of certain types of vegetation. Livestock raising takes place in this area, using the natural pastures or local crops for feeding the animals, which provide the raw material to be processed. Thus it follows that the cheese is the result of a number of factors, which have a direct effect on the final qualitative characteristics of the designation of origin cheese.

Production technique: After the coagulating of the milk with calf rennet, making use of the spontaneous development of cheese microflora, the curd is heated and broken into lumps roughly the size of a grain of rice. The curd is then placed in traditional cheese moulds which give it its characteristic concave shape. After salting, the cheese undergoes the ripening stage, which begins in the traditional "casere d’alpe" rooms and is completed in the production plants down in the valley, following the natural march of the climate in the production area, for a minimum of 70 days, which may be followed by an additional period of ageing lasting up to several years.