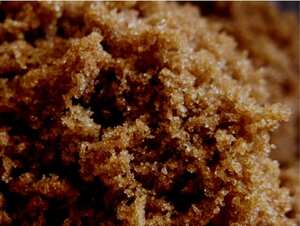 GTS Basterdsuiker/ Basterdsuijcker has had this name from time immemorial. ‘Basterdsuiker’ used to be a by-product — a bastard grade — of white sugar. As the 1924 Sugar Act states, ‘Basterd is a by-product of the refineries, i.e. of the crystallisation of the syrup produced during the formation of the loaves.’ There are no other products of the same name or similar products with a similar-sounding name.

‘Basterdsuiker’ consists of pale to dark solid granules (crystals) which have a sweet taste and a very sweet odour. Depending on the type of ‘Basterdsuiker’, its taste and odour are more or less caramel-like. The low moisture content of the product means that it is relatively dry and has a comparatively long shelf-life. Invert sugar is always added to ‘Basterdsuiker’, sometimes in combination with sugar syrup and/or caramel, giving the product the following specific characteristics:

Granulated sugar granules can range from fine to coarse, depending on the crystallisation time. Sieves are used to ensure the correct granule size. Only fine sugar with a specific granule size is suitable for making ‘Basterdsuiker’

‘Basterdsuiker’ has a loose, crumbly structure due to its higher moisture content (owing to the presence of invert sugar).

As a result of its fine granule size, ‘Basterdsuiker’ is highly soluble and therefore has unique baking properties. The sugar (sucrose) content of ‘Basterdsuiker’ should be at least 90 % of the dry matter content.

Invert sugar syrup, which is made from granulated sugar, is also added. The sucrose is hydrolysed by acids or enzymes, and glucose and fructose molecules (invert sugar) are produced. The invert sugar content of the end-product should be at least 0,5 %, which means that the moisture content (at least 0,5 % but not more than 2 %) is also higher than that of granulated sugar. The ash content of ‘Basterdsuiker’ may not exceed 2,5 % in dry matter.

‘Basterdsuiker’ is slightly less sweet than granulated sugar, as it has a lower sucrose content (at least 90 % of the dry matter content). However, it does not taste any less sweet, because it is rapidly soluble and contains invert sugar syrup. The fructose and glucose (invert sugar) contained in ‘Basterdsuiker’ give it a sweet taste which has a different flavour profile because the sweetness develops more rapidly (it is tasted more quickly) and gains in intensity more quickly, which means that it does not linger as long as that of normal granulated sugar.

Description of the production method

The syrup is premixed. A different type of syrup is used for each type of ‘Basterdsuiker’, i.e. there are three types of syrup:

Sugar is dissolved with water in a dissolving tank at 90 °C to obtain the basic raw material (liquid sugar solution) for invert sugar syrup.

To obtain liquid invert sugar syrup, acid (e.g. citric acid) is added to the liquid sugar solution and the mixture is heated. When the correct degree of inversion has been reached, sodium hydroxide is added to stop the inversion process. The invert sugar syrup obtained is cooled back down to approximately 45 °C. This product can be used to produce white ‘Basterdsuiker’. Caramel and/or sugar syrup may also be added, depending on the recipe. After mixing, these syrups are suitable for the production of pale/yellow ‘Basterdsuiker’ and dark/brown ‘Basterdsuiker’.

The first step is to select the appropriate recipe. Granulated sugar with a typical granule size (average between 0,5 mm and 1,5 mm) is ground/sieved, producing finer granules which, by the end, should have the typical size (see table under point 3.5). Grinding mills and/or sieve installations are used to achieve this.

The specific character of ‘Basterdsuiker’ comes from the fact that, as a quality sugar, it is significantly different from other sugars, such as white granulated sugar and raw cane sugar. The particular invert sugar content of ‘Basterdsuiker’ gives it a unique composition and a number of specific qualities.

‘Basterdsuiker’ contains a particular quantity of invert sugar. Invert sugar consists of equal proportions of glucose and fructose, which are reducing sugars. This means that, when they are combined with certain (protein) amino acids, they react (Maillard reaction) during heating and form condensation products under the influence of moisture. Carbon dioxide is released and dark-coloured compounds (melanoids) are produced in the Maillard reaction. During baking, this gives a brown colour to the baked product. On account of the quantity of invert sugar contained in ‘Basterdsuiker’, this reaction takes place at a lower temperature than for granulated sugar, making baked products containing ‘Basterdsuiker’ turn brown more quickly than if they were baked using other sugars. When a product made with ‘Basterdsuiker’ is fully baked, it will have a brown colour. Products baked using other sugars can still be very pale when fully baked. The degree of browning will vary depending on the type of ‘Basterdsuiker’ used. White ‘Basterdsuiker’ gives the palest brown colour, dark/brown — the fullest.

Not only carbon dioxide and dark-coloured compounds but also taste components are released during the Maillard reaction. These give baked products containing ‘Basterdsuiker’ a characteristic sweet taste different from what they would have if they were baked using other sugars. The Maillard reaction gives each product its own set of taste components, which determines the flavour of the product. The characteristic taste components are reminiscent of almond, caramel and honey. The caramel-like flavour will be more or less pronounced depending on the type of ‘Basterdsuiker’ used.

Another characteristic of invert sugar is its moisture-attracting and moisture-binding effect. Products in which moisture is bound (retained) remain soft and doughy for longer and do not dry out. Furthermore, the dark-coloured compounds (melanoids) act as an antioxidant in fatty bakery products to prevent the fat from turning rancid, thereby increasing the product’s shelf-life. These two characteristics ensure that a product containing ‘Basterdsuiker’ stays fresh for longer than a product made using other sugars.

The small granule size of ‘Basterdsuiker’ causes it to dissolve more rapidly in a dough than granulated sugar, particularly in fatty doughs containing little water. ‘Basterdsuiker’ will melt in the moisture contained in the product, thus increasing the liquid content of the dough. (The fewer solid sugar crystals that remain in the dough, the more it will contain in dissolved, liquid form.) This causes the dough to spread out more and allows a smoother dough to be used, making the structure of baked products containing ‘Basterdsuiker’ finer and less crusty (softer) than if they were baked using other sugars.

Traditional character of the product

Initially (at the beginning of the 17th century), ‘Basterdsuiker’ was made by hand, but it has now been factory-produced for a century. The factory production method has remained unchanged in that time, although the production process has been improved, streamlined and further mechanised. The factories (founded at the beginning of the 20th century, all around 1910) are still in operation. They have been internally modernised as technology has advanced.

‘Basterdsuiker’ is a quality of sugar that was traditionally a by-product left over from sugar production. It was the first sugar obtained in the production process that no longer met the specifications for white sugar. The provisions of the Excise Duty Act meant that ‘Basterdsuiker’ was much cheaper. The pastry bakers of the day naturally used their money wisely and were amazed to find that this cheaper (bastard) sugar gave them a much better end-product.

De Suikerraffinadeur (the sugar Refiner) by J. H. Reisig, dating from 1783, describes how ‘Basterden’ were produced. Dark-coloured sugar syrups were poured into conical moulds and then dried. After two to three days, the loaves were ‘covered’ to expel the remaining syrup. This was done by slowly pouring water over the loaves. In order to prevent the water from dissolving the hard base, the mould was covered with a layer of pipe clay through which the water slowly trickled. The remaining layer of dry clay was removed from the loaf and the process was repeated until the loaves contained no imperfections. One loaf of ‘Basterdsuiker’ contained all three colours, as the method used caused the syrup to descend to the bottom of the mould, i.e. the top of the sugarloaf cone. The sugar was then shaved from the loaf in batches and, working from the base of the cone to the top, was sorted into ‘white’, medium-grade and ‘common’ ‘Basterdsuiker’. The amount of syrup contained in ‘Basterdsuiker’ and its sucrose content varied from type to type (though the sucrose content was lower than that of granulated sugar). To this day, there are still three types of ‘Basterdsuiker’, namely white, yellow/pale (the medium-grade type) and dark/brown.

Since technological progress meant that sugarbeet factories were producing less and less ‘Basterdsuiker’ (as a by-product), the factories started to specially produce all three types (to order) in response to continuing demand for a product consisting of a granular sugar containing some syrup. The way in which ‘Basterdsuiker’ is prepared has basically remained the same since the end of the 19th century.