An IKEA ball whisk and a gravy whisk 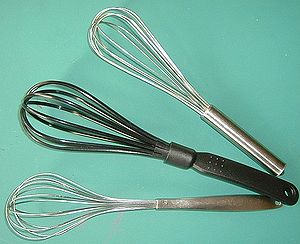 A whisk is a cooking utensil (Properly referred to as a Wire Whip) used in food preparation to blend ingredients smooth, or to incorporate air into a mixture, in a process known as whisking or whipping. Most whisks consist of a long, narrow handle with a series of wire loops joined at the end. The wires are usually metal, but some are plastic for use with nonstick cookware. Whisks can also be made from bamboo and other natural materials.

Whisks are commonly used to whip egg whites into a firm foam to make meringue, or to whip cream into whipped cream.

Whisks have differently-shaped loops depending on their intended functions: