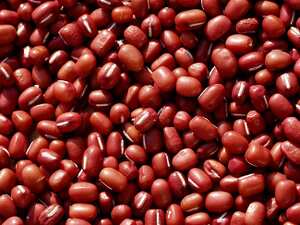 The azuki bean (also spelled adzuki or aduki) is an annual vine widely grown throughout East Asia and the Himalayas for its small (approximately 5 mm) bean. The cultivars most familiar in north-east Asia have a uniform red color, but white, black, gray and variously mottled varieties are also known. Genetic evidence indicates that the azuki bean was first domesticated in the Himalayas. It was cultivated in China and Korea before 1000 BC. It was later taken to Japan, where it is now the second most popular legume after the soybean.

In East Asian cuisine, the azuki bean is commonly eaten sweetened. In particular, it is often boiled with sugar, resulting in red bean paste, a very common ingredient in all of these cuisines. It is also common to add flavouring to the bean paste, such as chestnut.

Yōkan is a thick jellied dessert made of Azuki bean paste, agar, and sugar.

Red bean paste is used in many Chinese foods, such as tangyuan, zongzi, mooncakes, baozi, and red bean ice. It is also used as a filling for Japanese sweets such as anmitsu, taiyaki and daifuku. A more liquid version, using azuki beans boiled with sugar, lotus seeds, and orange peel, produces a sweet dish called red bean soup. Azuki beans are also commonly eaten sprouted, or boiled in a hot, tea-like drink. Some Asian cultures enjoy red bean paste as a filling or topping for various kinds of waffles, pastries, baked buns or biscuits.

How to cook Adzuki beans in a pressure cooker