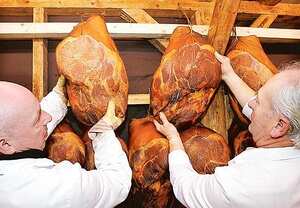 The pork leg is rubbed with a mixture of sea salt and cane sugar. This mixture can also include additional pepper and chopped juniper berries. The hams are left to rest covered with the mixture for two weeks in the open air. At the end of this period, the salt mixture is removed. Then they are seasoned with spices and the smoking is started, which takes place on the floor of a smoke house without a chimney. This process extends at least ten weeks, after which they are left to mature.

G.g.A. Ammerländer Dielenrauchschinken has a light smoked colour and mild, lightly flavour. It has a strong red meat colour when cut and a typical smoked aroma. The lean meat has a specific ham aroma and flavour, which is rounded off and increased in gastronomic value by the fatty part. The fatty part must have a good aroma.

The production area of the G.g.A. Ammerländer Dielenrauchschinken is in Ammerland Rural District, between the rivers Weser and Ems, in the federal state of Lower Saxony.

The G.g.A. Ammerländer Dielenrauchschinken is the result of a long tradition, since already many centuries ago the local butchers produced an excellent ham. These were produced by local farmers in a small quantity for their own use. It was in the 19th century that the fame of this ham expanded beyond its production area. In fact, the industrialisation in Europe brought large scale production and the hams were delivered to middlemen in urban centres and also exported abroad (England, United States, etc.).

The G.g.A. Ammerländer Dielenrauchschinken can be kept for a rather long period of time if kept in a cool environment. It is advisable to wrap it in a cloth and cover the cut part well, to maintain the ham's right humidity. It is recommendable to keep the slices covered in clingfilm in the refrigerator. The G.g.A. Ammerländer Dielenrauchschinken is consumed plain, but can also be used in many preparations. To best enjoy its flavour, it is recommendable to cut the ham by hand, in order to obtain a thick and soft slice, or even dice it, to then cook and use it as an ingredient in other dishes that allow the full savouring of the aroma.

The matchless flavour of the Ammerländer Dielenraucheschinken PGI is the result of production methods, improved through centuries of tradition, such as the accurate maturation process that extends for over two years. When the producer sells the ham, it must be well cured, have an appropriate proportion of fat on the lean part and be dried to a water:protein ratio of 2,5:1.