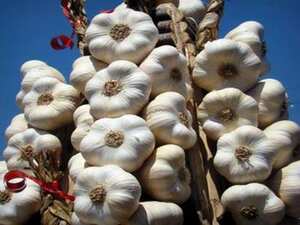 IGP ‘Ail blanc de Lomagne’ is a white to off-white garlic bulb, sometimes tinged with violet, made up of several cloves (8 to 12 depending on the size). ‘Ail blanc de Lomagne’ is distinguished by the size and evenness of its cloves, which are beige to cream in colour, sometimes streaked with violet. Each clove is wrapped in a husk consisting of a single layer of skin. The individual cloves together form a bulb, which is itself covered by several layers of thin skin. These bulbs are sold as ‘extra’ or ‘class I’ garlic and are subject to the corresponding restrictions, such as having a minimum diameter of 45 mm. ‘Ail blanc de Lomagne’ is sold dried and presented in the traditional way, i.e. plaited into strings, packed in baskets, bags or pallets, or sold to the consumer packaged in nets.

Method of production: At the production stage: All activities relating to the production, drying and peeling process take place within the designated area. Producers select their seed stock on the basis of the list of varieties issued annually by the Association de défense de l'ail blanc de Lomagne and sow only certified seeds. The varieties authorised for planting are selected with reference to two control varieties descended from the original ‘blanc de Lomagne’ population. Acceptability thresholds for new varieties are set in order to compare their characteristics with those of the control varieties.

In Lomagne, the land suitable for garlic cultivation has a clay content of over 20 %. Acidic soils with a pH lower than 7,5 are unsuitable. To plant their crop, producers must select a plot of land that lies within the geographical area and has not been used for garlic cultivation for the last three growing seasons. Nor may garlic be planted after sorghum, maize, alfalfa or other alliums, or after the plot has been used as meadowland.

Sowing takes place between 15 October and 15 December. Fertilisers must be applied little by little and sparingly, taking into account the growth stage of the crop. To determine when to start harvesting the crop, producers must take account of the visual indicators of maturity (yellowing leaves, softening of the stem near ground level) as well as the ratio of the weight of the bulbs to the weight of the foliage.

The garlic is dried by hanging it from sticks in the traditional way or by forced ventilation. The weight loss of the garlic is monitored to determine how far the drying process has progressed. During the drying process, the bulbs lose between 20 % and 30 % of their original weight when harvested. After drying, the garlic must be peeled by hand to ensure that the bulbs are sufficiently white. This involves removing the faded, discoloured or torn outer layers of skin while keeping the last layer intact. During peeling, the roots are cut off, by hand, right up to the root disc, taking care not to damage the root disc in the process.

Now as in the past, the garlic can then be sorted and approved within the designated area, either at the packing station or on the farm. Localising these operations also makes it possible to guarantee the traceability of the product. After it has been approved, the garlic harvested with its foliage can then be presented in the traditional way for ‘Ail blanc de Lomagne’, for example in bunches, in baskets or plaited into strings.

Past and present reputation: As regards the history of production, a compendium of agricultural statistics for the Castelsarrasin area, dating from 1868, mentions the importance of garlic cultivation for the economy of Tarn et Garonne. From 1902, in the commune of Beaumont-de-Lomagne, 80 hectares were being used for garlic. As the annual agricultural statistics show, garlic growing continued to spread in Lomagne throughout the 20th century, with the area under cultivation reaching 500 hectares in 1929 and 2 810 hectares in 1980. From 1936, the creation of the ‘établissements DURAN’ and the emergence of traditional markets at which farmers could sell their surplus production provide confirmation that garlic has long been traded in Lomagne.

Starting in the early 1960s, numerous events have been held with garlic as their central theme. The first competition for the best string of garlic was held at Beaumont-de-Lomagne in 1961. The garlic festival in Beaumont-the-Lomagne has been held on the same day every year since 1994. From 1960, various studies were also conducted with the aim of improving production techniques. The results of these studies were presented at the national garlic days held in Beaumont-de-Lomagne between 1966 and 1974. The various events centred around ‘ail blanc de Lomagne’, including the competitions held for traditional presentation techniques, all give garlic growing a festive and convivial character and enhance the product's reputation.

Other characteristics: Preserving traditional skills ‘Ail blanc de Lomagne’ is produced in a way that preserves skills that have been passed down from generation to generation, such as hanging the garlic from sticks to dry, peeling the garlic by hand and presenting it in the traditional way (in strings, baskets or bunches). The traditional way of drying garlic involves harvesting it with its foliage and hanging it from sticks in a covered shelter with open sides. The ‘Autan’, a warm, dry wind that blows in off the Mediterranean, plays a very important role in the natural drying process. It is very strong in Lomagne and so helps to preserve the traditional open-air drying technique. The mandatory process of peeling by hand ensures that the product has the impeccable appearance so characteristic of ‘ail blanc de Lomagne’, i.e. a homogeneous bulb that is white in colour and free from tears, with uniformly trimmed roots. The fact that there is no rigid flowering stem allows ‘ail blanc de Lomagne’ to be presented in the characteristic way, for example in strings and bunches. These traditional presentation techniques are very prominent in the events organised around ‘ail blanc de Lomagne’.