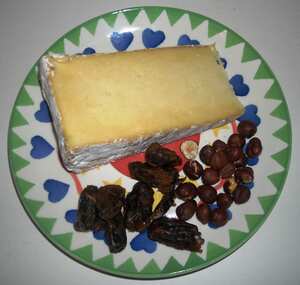 Adlestrop is produced by Daylesford Organics, which is situated in the village of Daylesford in Gloucestershire. It is owned by Sir Anthony Bamford, the manufacturer of JCB excavators. It is made with pasteurised cows' milk which comes from their own herd of Friesian cows which roam the unpolluted green pastures of the Cotswold Hills. It takes its name from a nearby village.

It is quite difficult to describe this artisan cheese. It has the strong aroma, typical of rind-washed cheeses such as Stinking Bishop or Époisses de Bourgogne, but the rind is mould coated and is not soft or sticky. Although it has a semi-hard, slightly crumbly texture, the flavour is slightly spicy and resemembles that of Camembert de Normandie. It is straw yellow in colour and has a beige rind, coated in white mould. It is matured for 10 weeks and is cylindrical in shape. It is washed with a microbiological culture, the result of which is a very exceptional cheese with a unique flavour.

It is ideal for the cheese board or with pumpernickel and apple and chilli chutney.

This cheese has won many awards: