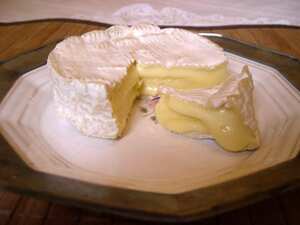 Camembert de Normandie is an AOP soft cheese, with a downy rind, made with unpasteurised milk, in the shape of a small, flat cylinder weighing an average of 250 g

The regions of Low and High Normandy which make up Normandy. The Norman "lands", stretching across two large regions with varied soil types, which decrease in age from west to east, are characterised by a thoroughly oceanic climate. The significance of permanent meadow and pasture typifies farming in Normandy, where 60% of farmland is permanent grassland. Once it had been "invented", Camembert was soon a great success in France and abroad and gave rise to many imitations. So it was that the Syndicat des Fabricants du Véritable Camembert de Normandie constituted itself in 1909 in order to obtain recognition of the special nature of Camembert de Normandie, a product of the land and its traditions.

Camembert is Normandy's most famous cheese. Its name remains associated with Marie Harel, who ran a farm at the end of the 18th century in the commune of Camembert, near Vimoutiers (Orne), and who is said to have "invented" Camembert. In fact, she improved the production of a local cheese by following the advice given by a priest who refused to take the oath at the Civil Constitution of the Clergy in 1792. The descendants of Marie Harel continued the tradition and developed the production of Camembert; from the Auge valley, its production spread to the whole of Normandy. In 1980, the Syndicat des Fabricants du Véritable Camembert de Normandie, the association of producers of real Camembert requested the AOC, which was granted in August 1983.

Camembert de Normandie is a cheese made by spontaneous draining; one of its unique features consists in intermittent shaping of the curds with a ladle in at least four successive operations, which gives the paste its characteristic pliability and creaminess. Seasoned with dry salt, its ripening process is generally completed within 30 to 35 days (minimum 21 days).