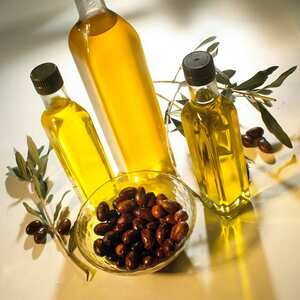 Aceite de Terra Alta aka Oli de Terra Alta is a Spanish DOP extra virgin olive oil made from fruit of Olea Europea L. trees of the Empeltre variety or a mix of Empeltre and the Arbequina, Morruda and Farga secondary varieties, using either mechanical or physical means which do not alter the oil and preserve the taste, aroma and characteristics of the fruit from which it is made.

Empeltre is the principal variety by virtue of its predominance in the area of production.

The characteristics of olive oil of the Terra Alta designation of origin are as follows:

The area of production comprises the Terra Alta area and a number of municipalities in the Ribera d'Ebre area, both areas being situated in the southeastern part of the Autonomous Community of Catalonia. The first-processing and market preparation area is the same as the area of production.

Spacing: generally corresponds to a density of 50 to 80 trees per hectare.

Soil preparation and pruning: those typically practised in the area of production. Pruning removes the older wood, giving the tree a rounded shape which encourages fruit production and facilitates harvesting. The breakdown between dry and irrigated land is currently 90 % and 10 %.

Harvesting: begins in mid-November and lasts until the end of January. It involves picking the olives manually, direct from the tree/shaking the latter using vibrating machines.

The DOP extra virgin olive oil is obtained from sound olives of approved varieties, picked, with the greatest care, direct from the tree, when the olives are at their best in terms of ripeness. After the olives have been transported to the mills under conditions designed to preserve their quality, a number of mechanical processes are carried out which include washing, pressing, beating of the paste, separation of the various phases, and storage. After quality evaluation the olive oil is placed in containers of up to five litres.

The olives must be pressed within 48 hours of being picked, to avoid impairing the quality. The olive oil must come from olives of the principal variety, i.e. Empeltre, or from a mix of Empeltre and the secondary varieties Arbequina, Morruda and Farga.

Only oil made from olives grown on trees that are five years old or more can qualify for the Aceite de Terra Alta DOP.

The entire process, i.e. from production to labelling, takes place in the defined geographical area to ensure quality and traceability.

Olive growing was most likely introduced into Catalonia and, therefore, Terra Alta, by the Arabs, olive oil mills still being known locally as almazaras, a word of Arabic origin.

In 1948, in a book entitled Mis Memorias, Antoni Mascaró wrote that in about 1787 the most widespread form of production in the municipality of Batea was olive growing, followed by cereals and vines ‘. . . the solid opulence of the area was to a large extent attributable to olive oil production, which that year reached 21 000 cántaros, i.e. 31 920 Castilian arrobas (350 tonnes)’. This means that a town which at the time had a population of fewer than 1,000 inhabitants would have been producing about 1,800 tonnes of olives. In his Diccionario Geográfico (1847), Pascual Madoz writes that in 1847 the Gandesa area produced large quantities of high-quality olive oil, wheat and rye. Again according to Madoz, olive growing was by far the biggest form of cultivation in what is now Terra Alta, far outstripping present levels of production.

Towards 1900, olive groves were the second most important form of cultivation in the Terra Alta area, accounting for more than 28 % of the farmland, the actual figure per municipality ranging from 20 to 44 %. The municipalities with the largest olive growing area were Batea, La Fatarella and Horta de Sant Joan. Olive oil production was about 2 000 tonnes.

Empeltre is, in the Terra Alta area, the principal and in some cases the only variety of olive grown. A variety whose origin dates back in time, its name derives from the Catalan word ‘empelt’ (graft), in all probability because it was grafted onto older varieties grown in the Baix Aragon and Vall de l'Ebre areas. Such are the importance and specific characteristics of the Empeltre variety in the Terra Alta area that it is referred to as the Terra Alta variety in tree nurseries.

The characteristics of the olive oil are influenced by the environment.

Although it has, like most olive growing areas, a Mediterranean climate, the relief of the area is responsible for a special microclimate which has a direct effect on the biological cycle of the olive tree and, by the same token, on the olives.

The three key aspects of the relief are as follows:

Cerç, the former because it provides the necessary moisture and the latter because, thanks to its nature and frequency, it prevents many fungal diseases by helping the raw materials, i.e. the olives, to ripen without problem and reach the olive oil mills in the best possible state.