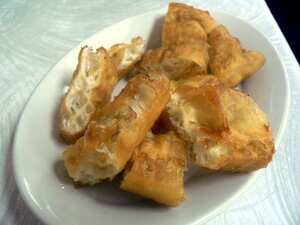 Youtiao, you char kway, or yau ja gwai , sometimes known in English as Chinese cruller or fried bread stick, is a long, golden-brown, deep fried strip of dough in Chinese cuisine and other East and Southeast Asian cuisines and is usually eaten for breakfast. Conventionally, youtiao are lightly salted and made so they can be torn lengthwise in two. Youtiao are normally eaten as an accompaniment for rice congee or soy milk.

The Cantonese name yàuhjagwái literally means "oil-fried ghost" and, according to folklore, is an act of protest against Song Dynasty official Qin Hui, who is said to have orchestrated the plot to frame the general Yue Fei, an icon of patriotism in Chinese culture. It is said that the food, originally in the shape of two human-shaped pieces of dough but later evolved into two pieces joined in the middle, represents Qin Hui and his wife, both having a hand in collaborating with the enemy to bring about the great general's demise. Thus the youtiao is deep fried and eaten as if done to the traitorous couple. In keeping with the legend, youtiao are often made as two foot-long rolls of dough joined along the middle, with one roll representing the husband and the other the wife.