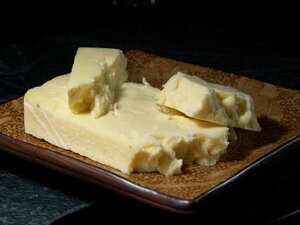 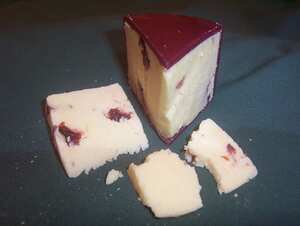 Wensleydale cheese is a cheese produced from pasteurised cows' milk in the town of Hawes in Wensleydale, North Yorkshire, England. It is also made in other parts of the country. There are four types, all of which are suitable for vegetarians:

Real Yorkshire Wensleydale is usually shaped into a variety of weights in a range of moulds from a small flat disc known as a "truckle" that is highly pressed, and preserved in wax, to several larger cheeses - it has an acidic-honeyed flavour to it.

Mature Wensleydale is a harder, more highly-flavoured version of the Real Yorkshire Wensleydale and highly prized by cheese connoisseurs.

Blue Wensleydale has blue veins and is produced in range of sizes. It is highly flavoured but less salty than the classic British blue cheese - Stilton.

Smoked Wensleydale is cold smoked to produce a cheese with a special tang and texture.

The flavour of Wensleydale is suited to combination with sweeter produce, such as fruit. A popular combination available in many restaurants and delicatessens is Wensleydale containing cranberries. In the north-east of England it is often consumed with fruit cake or Christmas cake.

The Wensleydale pastures give the cheese the unique flavour for which it is renowned. Good Wensleydale has a supple, crumbly, moist texture and resembles a young Caerphilly. The flavour suggests wild honey balanced with a fresh acidity.

In his essay 'In Defence of English Cooking', George Orwell rates Wensleydale as second only to Stilton among British cheese varieties.

Perhaps the first time that Wensleydale cheese was thrust into the limelight was as one of the cheeses mentioned by John Cleese in the Monty Python sketch "The Cheese Shop", which originally appeared in a 1972 episode of Monty Python's Flying Circus. In addition to the cheese being mentioned by name, the shop owner, played by Michael Palin, was named Henry Wensleydale.

In the 1990s, sales had fallen so low that production was at risk of being suspended. However, the popular Wallace and Gromit animated shorts A Grand Day Out and A Close Shave had the main character Wallace, a cheese connoisseur, mention Wensleydale as a particularly favourite cheese. Animator Nick Park chose it solely because it had a good name that would be interesting to animate, unaware of the company's financial difficulties. The company contacted Aardman Animations about a licence for a special brand of "Wallace and Gromit Wensleydale", which proved to be an enormous success. When the 2005 full-length Wallace and Gromit film, Curse of the Were-Rabbit, was released, sales of Wensleydale cheeses jumped by 23%.

In Series 1, Episode 8, aired 1 October 1995, Pinky (an anthropomorphic mouse) sings about his favourite thing, cheese. During the "Cheese Roll Call", only three of a vast army of cheeses introduce themselves. One of them is Wensleydale, which describes itself as "Lightly pressed and smooth textured, with a subtle milky flavour that is clean and refreshing."