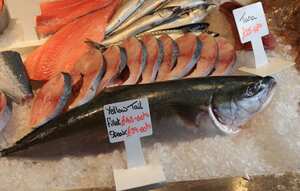 Tuna are several species of ocean dwelling fish in the family Scombridae, mostly in the genus Thunnus. Tunas are fast swimmers, they have been clocked at 70 km/h (45 mph) and include several species that are warm-blooded. Unlike most fish species, which have white flesh, tuna have flesh that is pink to dark red.

How much does one cup of tuna weigh?