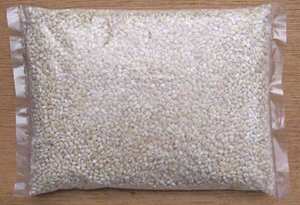 Pearl barley (or "pearled barley") is barley processed to remove its hull and bran. Barley must have its fibrous outer hull removed before it can be eaten; pearl barley is taken a step further, polished to remove the nutritious bran layer.

Pearl barley is the most common form of barley for human consumption, probably because it cooks faster and is less chewy than other, less-processed forms of barley. This is in contrast to "hulled barley" or barley groats, which preserves the bran, or "pot barley" (also known as "Scotch barley"), in which the endosperm is not removed.

Pearl barley is similar to wheat in its caloric, protein, vitamin and mineral content.

How much does one cup of pearl barley weigh?