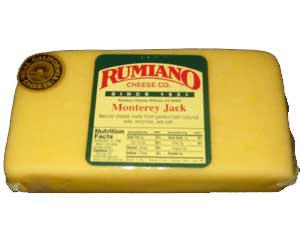 Monterey Jack is an American semi-hard cheese made using cows' milk. It is commonly sold by itself, or mixed with Colby cheese to make a marbled cheese known as Colby-Jack (or Co-Jack).

In its earliest form, Monterey Jack was made by the Franciscan friars of Monterey, California, during the 1800s. A Californian businessman by the name of David Jack first began to mass market the cheese. He produced a mild, white cheese, which came to be known at first as "Jack's Cheese", and eventually "Monterey Jack".

Another version called Pepper jack mixes hot peppers with Monterey Jack for a zesty flavour. Pepper jack is often used as an alternative cheese in dishes such as quesadillas.

In the UK, El Paso market Monterey Jack as Mexican cheese. If Mexican cheese or Monterey Jack is called for in a recipe, unless you are really picky, I would use Cheddar cheese as a substitute. It is markedly cheaper and to my palate, not a great deal different.