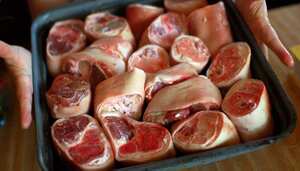 A ham hock is the joint between the femur and tibia/fibula, where the foot was attached to the hog's leg. It is the portion of the leg that is neither part of the ham proper nor the foot or ankle, but rather the extreme shank end of the leg bone and the associated skin, fat, tendons, and muscle. This piece generally consists of too much skin and gristle to be palatable on its own, so it is usually cooked with greens and other vegetables in order to give them additional flavour (generally that of pork fat and smoke), although the meat from particularly meaty hocks may be removed and served.

Ham hocks are essential ingredients in soul food and other forms of American Southern country cooking. Eisbein is a German dish using the lower part of the ham hock. Hoppin' John is classic use of ham hocks with beans.