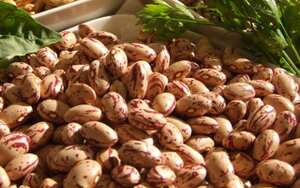 1 - The Spagnolo type has an ovoid shape and a fairly thin skin; the seed has typical wine-red striations; the pod is 11.5 cm long and each pod holds 4-5 seeds.

2 - The Spagnolit type has a rather rounded shape, sometimes with bright striations on a dirty-white ground. It is the most prized type, for its delicate flavour and for the especially tender skin.

3 - The Calonega type is widely grown because it combines a high yield with excellent cooking qualities. It has a flattened shape with bright red striations on a dirty-white ground.

4 - The Canalino type has a seed with dark red striations. It is especially resistant to disease, has a fairly thick skin and the pod is particularly coriaceous.

Chemical analysis of the product shows a high content of proteins (phaseolins in particular) and a very low cellulose content characteristics peculiar to the Fagiolo di Lamon della Vallata Bellunese.

GEOGRAPHICAL AREA: The area including the Feltrino, Bellunese and Val Belluria Mountain Communities of Italy.

EVIDENCE OF ORIGIN: The bean was introduced to the Belluno area by the humanist Pietro Valeriano, who received some seeds in 1532 as a gift from Pope Clement VII. There is also evidence from the mid-1600s of the presence of this legume in the Belluno area. An essay on agriculture in the Feltre District from 1700 mentions a highly-prized type of beans, and in the same period other experts recognized the beans from Feltre as being the best in the province. The preliminary deeds for the Austrian land registry (1862) also mention the bean being grown in Lamon.

ACQUISITION: Preparation of the seed-bed calls for ploughing 20-30 cm deep. The seeds are planted in the ground by pit sowing, with 4- 5 seeds per pit; the space between pits is 40-50 cm, with 100-120 cm between rows. The density is therefore 8/10 seeds/nr. The plants are supported, starting as soon as they first appear, on poles or reeds, preferably tied at the end with wire. Beans benefit greatly from irrigation and respond well to organic fertilizers. Harvesting is done by hand.

LINK: The development and importance of the bean, which has been in the province of Belluno since before 1600, has gone through high and low periods. From a highly prized legume exported to the provinces in the plains and also abroad, after World War II it went through a period of great crisis. After emigration, and then the coming of industrialization, the workforce turned toward other sources of income, and the fields were abandoned. An attempt to regain the image, the quantity and, above all, the quality has been taking place in the last few decades. The people have shown great interest in the project for revaluating the bean, especially at a part-time level; many areas, once abandoned, are being reclaimed bit by bit. The calcareous dolomitic soils and the fluvioglacial terracing typical of the foothills zone of the defined area lying under the layer of loam rich in stable organic matter is the ideal substrate for growing a bean with inimitable organoleptic qualities, characterized by a very thin, soluble skin attributable to the typical high potassium content of the soils in the production area. The potassium, which in fact competes with calcium and magnesium, forms more soluble compounds, helping to make some of the components of the skin break down more easily during cooking.