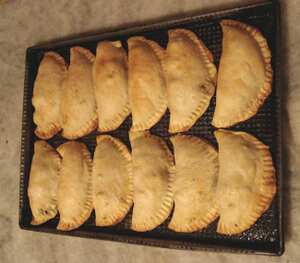 In Spain, Portugal, the Caribbean, Latin America, and the Philippines, an empanada (not to be confused with the Portuguese empada, which is a different dish) is essentially a stuffed pastry. The name comes from the Spanish verb empanar, meaning to wrap or coat in bread. Usually the empanada is made by folding a thin circular-shaped dough patty over the stuffing, creating its typical semicircular shape.