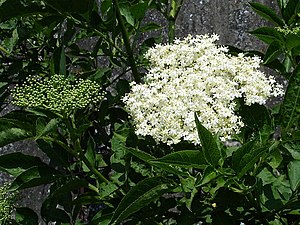 Sambucus (elder or elderberry) is a genus of between 5 and 30 species of shrubs or small trees in the moschatel family, Adoxaceae. It was formerly placed in the honeysuckle family, Caprifoliaceae, but was reclassified due to genetic evidence. Elderberries are the fruit of this tree.

Sambucus nigra (Elder or Black Elder; Europe and western Asia; with black berries) This is the species commonly found in Britain and Northern Europe. The fruit is edible, the fruit and flowers are used to make wines and cordials and can also be used medicinally.

The flowers of Sambucus nigra are used to produce elderflower cordial. The French, Austrians and Central Europeans produce elderflower syrup, commonly made from an extract of elderflower blossoms, which is added to Palatschinken filling instead of blueberries. People throughout much of Central, Eastern, and Southeastern Europe use a similar method to make a syrup which is diluted with water and used as a drink. Based on this syrup, Fanta markets a soft drink variety called "Shokata" which is sold in 15 countries worldwide. In the United States, this French elderflower syrup is used to make elderflower marshmallows. St. Germain, a French liqueur, is made from elderflowers. Hallands Fläder, a Swedish akvavit, is flavoured with elderflowers.

The Italian liqueur Sambuca is flavoured with oil obtained from the elderflower.

In Germany, yogurt desserts are made with both the berries and the flowers.

Wines, cordials and marmalade have been produced from the berries or flowers. Fruit pies and relishes are produced with berries. In Italy (especially in Piedmont) and Germany, the umbels of the elderberry are batter coated, fried and then served as a dessert or a sweet lunch with a sugar and cinnamon topping. In Germany, the dish is known as "Hollerküchel".

Hollowed elderberry twigs have traditionally been used as spiles to tap maple trees for syrup.

In Romania, a slightly fermented soft beverage (called "socata" or "suc de soc") is traditionally produced by letting the flowers macerate, with water, yeast and lemon for 2-3 days.

Elderflowers are at their best and in season during the following months: May & June.