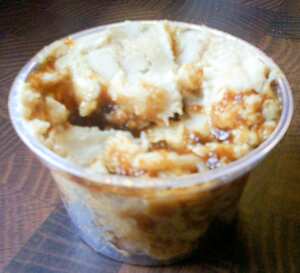 Dripping, also known as beef or pork dripping, is an animal fat rendered from the fatty or otherwise unusable parts of cow or pig carcasses.

It is used for cooking, especially in British cuisine, significantly so in Northern England, though towards the end of the 20th century dripping had fallen out of favour, due to its being regarded as less healthy than vegetable oils such as olive oil and sunflower oil.

Traditionally, fish and chips were fried in beef dripping, and this practice does continue in some places particularly in the North of England, however many such shops now use oils which are considered to be more healthy.

Pork or beef dripping can be served cold, spread on bread and sprinkled with salt (bread and dripping). If the tasty brown sediment and stock from the roast has settled to the bottom of the dripping and coloured it brown, then in parts of Yorkshire, this is known colloquially as a "mucky fat" sandwich.

Difference between dripping and lard 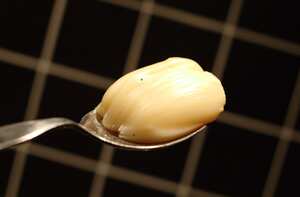 A teaspoon of bacon fat

Bacon fat liquefies and becomes bacon drippings when it is heated. Once cool, it firms into lard if from uncured meat, or rendered bacon fat if from cured meat. Bacon fat is flavourful and is used for various cooking purposes. Traditionally, bacon grease is saved in British and southern U.S. cuisine, and used as a base for cooking and as an all purpose flavouring, for everything from gravy to cornbread to salad dressing.

Bacon, or bacon fat, is often used for barding roast fowl and game birds, especially those that have little fat themselves. Barding consists of laying strips of bacon or other fats over a roast; a variation is the traditional method of preparing filet mignon of beef, which is wrapped in strips of bacon before cooking. The bacon itself may afterwards be discarded or served to eat, like crackling.