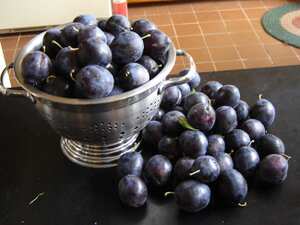 The damson or damson plum is an edible fruit, a subspecies of the plum tree. It is also sometimes known as the Damask Plum.

The damson is identified by its small, oval shape (though slightly pointed at one end), smooth-textured yellow-green flesh, and skin from dark blue to indigo. The tree blossoms with small, white flowers in early April and fruit is harvested in late August or early September.

The skin of the damson is heavily acidic, rendering the fruit unpalatable to some for eating out of hand (for which the "President Plum" variety is better suited). Because of this acidic, tart flavour, damsons are commercially grown for preparation in jellies and jams. A range of varieties of damson are available, with some such as 'Merryweather' being more appropriate for eating when ripe straight from the tree while varieties such as 'Farleigh' benefit from cooking.

The term damson is often used to describe red wines with acidic, plummy flavours. Damson wine is also a favourite among some people. Damson gin is made like sloe gin, although less sugar is necessary as the damsons are sweeter than sloes. Damson is occasionally used to make slivovitz.

Damsons are at their best and in season during the following months: September