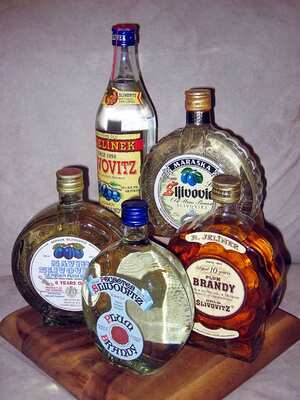 Slivovitz is a distilled beverage made from damson plums. It is frequently called plum brandy and is part of the category of drinks called rakia.

Note: As far as I know Slivovitz is made from prune plums, also called Italian prune plums not from damson plums. I don't believe that damson plums have a high enough sugar content.

Slivovitz is primarily produced in Slavic regions of Central and Eastern Europe, both commercially as well as by many households on an informal, homemade basis. Primary producing nations include the Czech Republic, Slovakia, Poland, Hungary, Bulgaria, Romania, Croatia, Serbia. It is most popularly consumed in those nations, as well as wherever communities of expatriate from these nations exist. Similar plum brandies are also produced in Switzerland, France, the United States, and Canada, but marketed under other names, such as brandy, Pflümli, or eau de vie.

In the manufacturing process, the damsons and a liberal proportion of the ground kernels are first crushed and pressed, then starch and sugar are added to the juice and the mixture is allowed to ferment. Distillation gives the crude product, and clarifying processes complete the liqueur, but ageing is required to develop its finer qualities. Its pleasing flavour is due largely to the plum kernels, which contain a considerable percentage of amygdalin, the characteristic component of bitter almonds.

Imitation slivovitz is made by flavouring spirits with prune juice and artificial oil of bitter almonds.