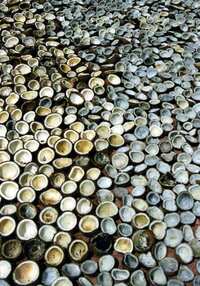 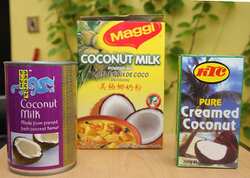 Depending on the brand and age of the milk itself, a thicker, more paste-like consistency floats to the top of the can, and is sometimes separated and used in recipes that require coconut cream rather than coconut milk. Shaking the can prior to opening will even it out to a cream-like thickness. Some brands sold in western countries add thickening agents to prevent the milk from separating inside the can, since the separation tends to be misinterpreted as a sign of spoilage by people who have no experience with coconut milk. 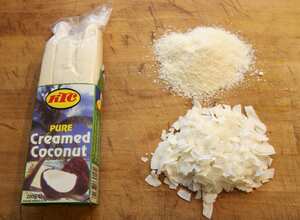 Coconut flakes are thin slices of coconut that have been dried so they have a long shelf life. They can be added directly to curries and stews and breakfast cereals. They can also be re-hydrated by immersing in boiling water for a few minutes, then draining. They are not usually available from supermarkets but can be found at most Indian or Asian stores.