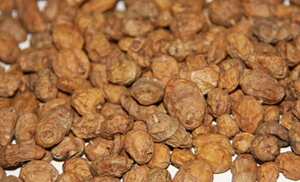 DOP Chufa de Valencia is a tuber of the species Cyperus esculentus. This comes in various shapes and sizes, has a thin outer skin, suberic tissue and a high fat and sugar content.

The following types of chufa will be protected:

The production area for protected chufas is situated in the north of Valencia's huerta (irrigated area). It measures a total of 6,500 ha and comprises the following municipalities: Albalat dels Sorells, Alboraya, Albuixech, Alfara del Patriarca, Alm`sserra, Benrepös i Mirambell, Burjassot, Foios, Godella, Meliana, Moncada, Paterna, Rocafort, Tavernes Blanques, Valencia and Vinalesa, all of which are situated in the province of Valencia in Spain.

Chufas of the species Cyperus esculentus, which is a native species, are grown in registered production areas. The tubers are harvested when they have reached the correct stage of maturity, and are then sent to washing and drying stations registered with the regulatory body, where they are washed, dried, cleaned, graded, undergo quality checks and are packed and labelled.

The Arabs introduced chufas into Spain as a product with a delicate flavour which, after maceration, produces a refreshing drink. In the XIIIth century, under the influence of Islamic culture, its cultivation developed in the Mediterranean part of what is now the Community of Valencia. In 1795 A.J. Cavanilles referred to the existence of 15 hectares of chufa at Alboraia and Alm`ssera and described its cultivation and consumption. Numerous works have been published by local researchers on the chufa, its characteristics, microbiology and the drink obtained by macerating it.

Flat area typical of coastal sedimentary areas around the Mediterranean. Loose light loam soils, well drained and levelled, with a light texture and free of weeds. A Mediterranean climate, with high relative humidity and a narrow temperature range during the day (due to the proximity of the sea).

Average temperatures between 13 and 25­C and the absence of frosts during the cultivation period are essential to the germination and growth of the tuber. Grown in rotation with other products of the Mediterranean huerta. The practice of preparing the land in strips about 4 m wide, of planting from April to June, of using appropriate planting patterns, distances and depths and of following controlled growing and harvesting methods provides ideal conditions for a tuber whose specific characteristics are closely linked to its geographical environment.