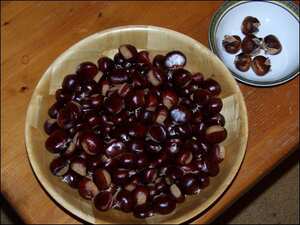 The chestnut is a genus of eight or nine species of deciduous trees and shrubs in the beech family Fagaceae, native to temperate regions of the Northern Hemisphere. The name also refers to the edible nuts they produce.

Most of the species are large trees growing to 20-40 m tall.

Chestnuts should not be confused with either horse-chestnuts (genus Aesculus), or water-chestnut (family Cyperaceae); these are named for producing respectively nuts of similar appearance, and tubers of similar taste.

The nuts are an important food crop in southern Europe, southwestern and eastern Asia, and also in eastern North America before the arrival of chestnut blight. In southern Europe in the Middle Ages, whole forest-dwelling communities which had scarce access to wheat flour relied on chestnuts as their main source of carbohydrates.

The nuts can be eaten candied, boiled or roasted; candied chestnuts are often sold under the French name marrons glacés or Turkish name kestane şekeri. Another important use of chestnuts is to be ground into flour, which can then be used to prepare bread, cakes and pasta.

Another little known use is to eat chestnuts raw by just peeling them (almost unknown in North-America but customary at least in Northwest Europe). When chestnuts are fresh from the field/store, peeling is not easy. However, after leaving them out at room temperature for 24-48 hours, using a simple small, pointed kitchen knife will allow the consumer to easily peel away the outside shell. Next, you peel the thinner inside skin. Wash, and if present cut away contamination, and eat. Chestnuts' taste may vary slightly from one to the next but is somewhat sweet and certainly unique. After leaving chestnuts out for more than 5-7 days the quality starts to degrade.

Chestnut-based recipes and preparations are making a comeback in Italian cuisine, as part of the trend toward rediscovery of traditional dishes.

The chestnut is one of many edible nuts.

How much does one cup of chestnuts weigh?

Chestnuts are at their best and in season during the following months: October, November & December.