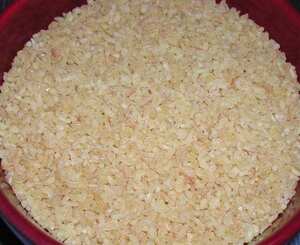 The key attributes of traditional bulgur production are that the grain is parboiled, dried (usually by spreading in the sun) and the bran is removed. Bulgur is often confused with cracked wheat, which is made from crushed wheat grains which have not been parboiled. Although traditionally de-branned, bulgur and cracked wheat products available in shops may or may not have had their bran removed. Thus there are whole-grain, high-fibre versions of each. Bulgur is most often found in Turkish, Middle Eastern, Indian and Mediterranean dishes. It has a light and nutty flavour.

How much does one cup of bulgar wheat weigh?