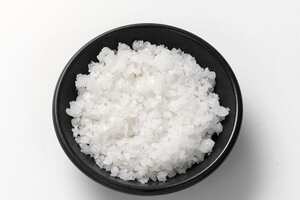 PDO Anglesey Sea Salt / Halen Môn is the name given to salt flakes harvested from the Menai Strait in Anglesey, North Wales. They are crystalline white, flat, soft flakes which contain over 30 trace elements and are additive free. The flakes of salt measure no larger than 2 centimetres across at grading. It is due to the mineral content that ‘Anglesey Sea Salt’/‘Halen Môn’ is demonstrably different in appearance, texture, taste and mouth feel. The salt has a concentrated salty taste and crunchy texture arising from the naturally occurring calcium and magnesium left after the unique rinsing process which gives the ‘Anglesey Sea Salt’/‘Halen Môn’ its white appearance and a clean taste without any bitterness which can be caused by excess calcium.

All processes of production and preparation are undertaken in the designated area, under controlled conditions to ensure a consistent end product is achieved including:

The Menai Strait is the strip of water separating the Isle of Anglesey from the mainland of Wales. The Strait runs from Fort Belan at the south-west end on the mainland side and Abermenai point on the Anglesey side to a line between the jetty projecting into the straits on Anglesey side and the end of Bangor pier on mainland side. The area is under the jurisdiction of the Caernarfon Harbour Trust.

Historically, the first records of salt making on the island of Anglesey were in Roman times, rising to a peak in the early 18th century. There are remains of a salt works in Holyhead at the north of the island on ‘Salt Island’ (or ‘Ynys Halen’ in Welsh) which is connected by a road to the main island. Salt Island gained its name from the salt works which processed seawater to make sea salt. The factory was closed down in the 18th century as rock salt was being used to ‘strengthen the brine’ which was seen as adulteration.

The Menai Strait is served by the clean Gulf Stream and does not have any large cities or heavy industrial sites present on its banks. Added to this, the extreme tidal range which results in the twice daily change of the water in the Strait by the incoming tide, provides the balance of trace elements which refreshes the seawater every day and gives ‘Anglesey Sea Salt’/‘Halen Môn’ its characteristic taste and appearance.

The Gulf Stream comes from the Atlantic and washes up the west coast of Britain. It is warmer than the east coast reaching a mean of 15 degrees in summer at the surface and 12 degrees at the bottom. Mean salinity of the sea water is 34,25 to 35 parts per 1 000 around the area although it can reach levels up to 36. The uniqueness of the product is partly due to the extreme tidal range of over 9,5 metres which means the Strait is changed twice a day by the incoming tide. The unusual double high tide, which occurs when the Gulf Stream washes around the island, helps to provide the balance of trace elements and acts to give a new body of seawater every day to draw from.

In addition, the sandbank and mussel bank allow the water to be pre-filtered, the shellfish also drawing calcium out of the seawater in the growing season. The quality of the raw material has a direct effect on the quality of the sea salt and is demonstrated by the seasonal differences affecting the taste and texture of the salt.

The unique qualities of ‘Anglesey Sea Salt’/‘Halen Môn’ derive from the raw materials, the pure seawater, and the method of crystallising and rinsing the salt. ‘Anglesey sea salt’/‘Halen Môn’ is an additive free sea salt which consists of naturally occurring trace elements and minerals. It is due to these mineral contents that ‘Anglesey sea salt’/‘Halen Môn’ is demonstrably different in appearance, texture, taste and mouth feel. Its flakes are large, crisp, flat and not granular. It has a concentrated salty taste with a crunchy texture. The process of rinsing process unique to this product gives ‘Anglesey sea salt’/‘Halen Môn’ a bright white appearance and a clean taste without bitterness which can be caused by excess calcium levels. The rinsing is carried out using concentrated brine made from the same local seawater, both to prevent the crystals dissolving and also to ensure the correct level of minerals, and therefore the taste and appearance of the salt are maintained.

Each saltmaker is given a ‘learning passport’ as part of their induction. This contains a series of tasks to be worked through to learn the skills needed for each part of the salt making process. Each part of the process is undertaken using standard operating procedures which detail the actions and lay down the standards for the salt’s quality. The saltmakers are trained to rinse the salt until the correct size of crystal, taste and appearance are achieved. This is achieved by on the job training and comparing the finished product to photos of the salt displayed in the harvesting area, looking at the size and shape of desirable flake, with crystals not measuring up to this exacting standard being reworked. Taste is measured by calibrating against unrinsed salt which is harsh and bitter compared to the mellow mineral balance of the finished product.

Chef Henry Harris of ex-Fifth Floor Harvey Nichols restaurant maintained that it ‘tastes of the cleanest oceans’. ‘Anglesey Sea salt’/‘Halen Môn’ is well established and highly recognised by the food industry both in the UK and worldwide. As a quality product it is used by many top chefs and gastronomes and it regularly appears as a named ingredient on their menus. Many renowned restaurateurs and agri-food businesses have demonstrated their preference for this salt.