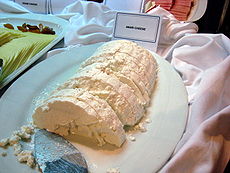 Anari is a fresh, mild, whey cheese produced in Cyprus. Although much less known than other Cypriot cheeses, it has started to gain popularity following recent publicity exposure. One of the main industrial producers on the island won a silver medal award in the 2005 World Cheese Awards in the UK.

The whey used is usually a by product in the production process of other harder cheeses, commonly that of Halloumi or Kefalotyri. The whey is gradually heated to 65oC in a large cooking bowl. A small amount of goats’ or ewes’ milk (5-10%) can be added at this temperature to improve the end product quality. The temperature is then increased to boiling point, whilst mixing. At 80-85oC small crumbly curds of Anari start forming and are skimmed off the surface using a slotted spoon or a colander. They are placed in a container that allows further drainage and then cut into cubes of roughly 10cm sides. Excluding the drainage, the above process takes roughly 1 hour.

In its simple form produced as above, Anari has a chalk-white appearance with a very soft consistency, similar in many ways to the likes of Mizithra, cottage cheese and Ricotta. Salt is often added and the product dried through gentle heating (in bygone times it was just left in the sun) and further maturation to create an extremely hard and non-perishable variant.

If the Anari cheese is not listed below, select a similar type of cheese from the list below to get a rough idea for the number of calories in Anari cheese.