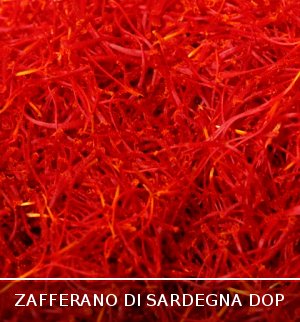 Zafferano di Sardegna is a PDO Sardinian saffron in the form of dried stigmas or pistils from cultivated Crocus sativus L. On release for consumption it is bright red in colour due to the crocin content, with a very intense aroma resulting from the safranal content and a distinctive taste attributable to the picrocrocin content.

Zafferano di Sardegna DOP must be packaged in the area indicated below, in order to guarantee the origin of the product, ensure that production is supervised and prevent the saffron being transported in a loose state, which would expose it to light and air and impair or even cause it to lose its specific properties. In fact, until it is packaged, Zafferano di Sardegna must be kept in glass, tin or stainless steel containers hermetically sealed against light and air. It must be packaged with care in such a way that it is protected from internal or external damage. The packaging material must be glass, terracotta, cork or cardboard (with only glass or paper coming into direct contact with the saffron) and must be such as to avoid the product being damaged or altered during transport or storage. Packages come in the following weights: 0,25 g, 0,50 g, 1 g, 2 g and 5 g.

The production area of Zafferano di Sardegna comprises the whole of the municipalities of San Gavino Monreale, Turri and Villanovafranca, in the province of Medio Campidano.

The area where the saffron is cultivated has a typical Mediterranean climate, which is generally mild, with rainfall concentrated in the autumn and winter, and hot, dry summers. Temperatures average 11,3 °C in the winter, around 24 °C in the summer and 17,6 °C over the year as a whole. Frost is very rare and snow exceptional. The land used for cultivating the saffron is extremely fertile, with deep alluvial deposits (vertisoils) and a light sand/clay consistency, is permeable, features little or no earth structure and has extremely good water retention.

The special properties of Zafferano di Sardegna stem directly from the morphological characteristics, soil and climate of the production area. These properties are testimony to the strength of the product's connection with a home region which is especially suitable, be it because of its human assets or the favourable climatic conditions, and highly hospitable to a plant which, it is said, ‘timit su frius e cikat su kallenti’ (dislikes the cold and searches out warmth). The morphological characteristics, soil and climate of certain parts of Sardinia and traditional growing and preparation techniques handed down from father to son combine to form a product with unique and unmistakable organoleptic characteristics and taste.

Sardinian saffron owes its special properties to the ways in which the product is cultivated, handled and processed through the various stages of production.

In particular, right from the start of the growing process, when propagating material is selected with great care and attention to detail, through the stages of picking, separating, drying and then storing the saffron, the know-how and techniques that the locals have acquired over centuries ensure a product of real quality. One such practice, centuries-old and requiring the hands of an expert, is the moistening of the stigmas with extra virgin olive oil before they are dried. This particularly important and distinctive practice demonstrates the strength and closeness of the link which the product has to the history and culture of the region in which it is produced. This link is seen also in the influence that Zafferano di Sardegna has had in various economic circumstances and its importance for the lives of the local population in the areas where it has been grown, as documented in historical sources.

Cultivation of saffron in Sardinia goes back to the time of the Phoenicians, the people who, in all probability, introduced it to the island. It was consolidated under Punic rule and in the Roman and Byzantine periods when the saffron was used predominantly as a dye and for therapeutic and ornamental purposes. But the first authentic evidence of saffron being traded is found in the 14th century, in the 1317 statutes of the port of Cagliari (the Breve Portus), which contain rules governing the export of stigmas from Sardinia. The cultivation and use of saffron spread further in the 1800s, when it was in demand not only for its aromatic and medicinal qualities, but also for dyeing silk and cotton, for use in cooking and as a form of currency in the marketplace. During the period of economic recovery after the war, saffron remained important for many families as a means of supplementing their income, as well as the symbol of the culture and traditions of a community that has always been engaged in agriculture and sheep-farming.