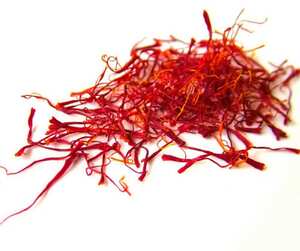 Zafferano di San Gimignano is a DOP saffron and is produced by roasting the orange-red coloured part of the floral stigmas of Crocus sativus L., a corm of the iridaceae family. The stigmas have the form of broad threads, spread at the tip. After roasting, their colour changes from orange to claret-red.

There are many records of this product originating in San Gimignano from the thirteenth-century. The quality and fame of San Gimignano saffron from 1200 is documented not only by the substantial export trade to other centres in Italy (Pisa 1238, Genoa 1291) but also by the unprecedented flow to eastern and African countries (Alexandria in Egypt, Tunis, Damietta, Acre, Tripoli and Aleppo between 1221 and 1247). The profits from the trade in saffron were sufficient to make the fortunes of several families, some of which â as is attested by various sources â decided to devote them to the construction of the famous towers which are still emblematic of the city. Saffron frequently appears in deeds of gift: in 1241, for example, the ComunitÃ  sent 25 pounds to the Emperor Frederick II who was camped nearby.

Historical documentation on the cultivation of the crocus (the common name for Crocus sativus) in San Gimignano is extraordinarily rich, so that we can derive the location of the fields used. A number of sources attest to the use of saffron in cooking, dyeing, medicine and painting from the thirteenthcentury.

It is mentioned in medieval financial and contractual documents and in laws and municipal regulations. Very many sources attest to the traditional cultivation of saffron in San Gimignano. The large bibliography includes:

Today, although saffron no longer has the major financial importance of former times, it is still very important for gastronomy and pharmaceuticals. The origin of Zafferano di San Gimignano will be guaranteed by a system of traceability based on the registration of producers and the land concerned by the supervisory body.

The first stage in the selection of the corms for planting is the rejection of any which are mouldy, marked or cut. They are planted in sandy or sandy-loam soil, which is the basic type in the area of San Gimignano, after the outer skin and any traces of the roots of the parent bulb have been removed, between the beginning of August and mid-September. The fertiliser used is organic. The flowers are harvested by hand early in the morning while they are still closed from the beginning of October to the end of November.

Once harvested, the flowers are taken to covered areas where, on the same day as they were harvested, they undergo 'mondatura' (cleaning) or 'sfioritura' (deflowering), an operation carried out by hand to separate the orange-red part of the stigmas while avoiding removing the whitish-yellow part. They are kept in hermetically sealed glass jars into which they are placed no more than five minutes after the completion of drying. These jars are kept in cool, dry areas, out of direct light. They are then dried, always at a temperature below 50°C. The stigmas are placed on nets or in sieves, usually of stainless steel, close to glowing charcoal derived from forest wood. They are stirred continuously to ensure that the process is uniform. Other forms of drying, such as the sun or electric ovens, are permitted.

The sub-arid climate which prevails in the area of production, particularly because of the lack of water in summer, has a positive influence, as is shown by the relevant scientific literature on the cultivation of the plant. The relief and soil are particularly suitable with a landscape of sandy-loam soil which drains well. The area of San Gimignano is propitious for the production of saffron, since the soil is permeable, well drained and healthy and the average annual rainfall is not high but concentrated in the winter with dry summers. The local relief is almost uniformly hilly with heights ranging from 170 m to 624 m, rolling and with slight or moderate slopes and some slight surface erosion. The valley bottom area is slight compared with the area of the hills. There are no water courses of note in the San Gimignano area and the water network is slight and irregularly distributed.

An analysis of the soil reveals it to be sandy or sandy-loam with little clay, well developed and generally fertile, fairly permeable, highly porous, very well drained and so able to hold a lot of air.

The climate too is favourable for saffron growing. Rainfall is highest in autumn and spring and lowest in summer. The range of temperatures over the year places the climate of San Gimignano in the sub-coastal/continental range. This combination makes the area excellent for saffron growing since the plant may be considered to have found its natural habitat there, becoming a local feature. Besides the undoubted suitability of the area, there is a link with the product deriving from a series of economic, social and production factors, all of long standing. The cultivation of saffron in San Gimignano has a long tradition, being documented from 1200. Every operation from the harvesting of the flowers to the selection of the stigmas and drying is still carried out by hand with no technical assistance. The 'mondatura' or 'sfioritura' are also carried out by hand with the utmost care and identification of the ideal time of roasting is done by eye on the basis of experience acquired over years by the oldest operators.

Saffron is mentioned in contracts in many medieval documents in San Gimignano. Particularly common in the countryside was the contract involving an advance cash payment for a certain quantity of saffron to be delivered at harvest time, ad novellum. Because of its versatility, it was also used instead of money. There are also historic links between trade in saffron and the rigid rules issued by the municipality to guarantee its weight and quality. The accuracy of weighing operations was entrusted to the Arte dei Medici e Speziali, who also checked the scales. Evidence of that activity can still be found today in San Gimignano in the persistence of surnames such as Pesalgruoghi or Pesalgruoci.

Today Zafferano di San Gimignano has been widely rediscovered for gastronomic and pharmacological use. In the area its uses in production and manufacturing are the traditional ones faithfully using the same methods. Many operations are still carried out by hand as they were in the Middle Ages: the selection of the bulbs, the harvesting of the flowers early in the morning, cleaning and drying near a fire.

It is used in local foods and some specialities, sometimes together with other typical products of San Gimignano, such as bread with vernaccia and saffron, and schiacciata with saffron. Certain texts such as the recipe book by an anonymous Tuscan of the fourteenth-century demonstrate how the importance of saffron in cooking has changed today compared with the past. Saffron was the basic ingredient of dishes such as i pestelli, la peverata, l'agliata, la porrata and of certain cheeses. The lack of attention to saffron is due mainly to a change in habits in recent years which has considerably undermined traditional practices and products. Today, fortunately, this trend has reversed, giving rise to a whole series of initiatives and events. For years, in the autumn when the crocuses are cleaned, San Gimignano has been holding a festival called âgiallo come l'oro (yellow as gold), to draw public attention to the cultural aspects of the consumption of saffron.