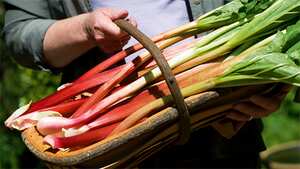 Yorkshire rhubarb producers were centralised on the suitable soils between Leeds, Wakefield and Bradford, which became known as ‘The Rhubarb Triangle’. The position of the Rhubarb Triangle situated within the shadows of the Pennines acts as a frost pocket. This geographical location has proved invaluable to the growers, as it provides the perfect weather conditions essential to the plant.

From an accidental discovery in Chelsea London in 1817, the early basic technique of growing rhubarb out of season began, initially by warming the root by covering with organic manure whilst still in the ground. In 1877 it came to Yorkshire. This was the first place in the world that special sheds were built for the purpose of forcing, and the technique as still used today was devised by the local Yorkshire growers. The soil in the area proved perfect for growth of the substantial root systems necessary to produce sufficient yields to cover the high costs of production. In the late 1800s rhubarb’s popularity grew so high there were over 200 dedicated producers alone in the Triangle.

High rainfall and early and extended dormant periods in root growth is necessary for early breaking of dormancy without loss of quality or yield. The soil must be carefully prepared to a depth great enough to allow the extensive roots to grow. Good moisture levels are important, but too much can cause the root to rot. Moisture retaining soils are beneficial for two reasons: firstly at plant establishment to aid growth and secondly to retain low temperature levels necessary both for the natural requirement of the plant and stored energy conversion. This is crucial for the quality of a forced petiole. Insufficient dormant period while the root lives outside in preparation for its forcing purpose, results in low yields, poor quality and flavour and returns not covering production costs.

Heavy industry in the area resulted in an atmosphere that helped induce early die back in autumn. Soot and ash were extensively spread onto the soil obtained from local industry, and the high local population’s chimneys resulting in sulphur deposits in the soil much to rhubarb’s liking. As the producers in Yorkshire consistently had the crop ready much earlier than elsewhere in the country, eventually growers in other parts of the country ceased production all together as they could not compete with the Yorkshire producers who had such beneficial conditions, and developed growing skills which ultimately resulted in the petioles that the Yorkshire Forced rhubarb growers became renowned for. This name Yorkshire Forced Rhubarb has been used by producers generally when marketing the product onto wholesale markets since 1877. At that time this was the usual outlet for the fresh product throughout the country.

The tall slender sticks of this PDO rhubarb, known as petiole sticks, range pink to red in colour with a compact yellow leaf. The intense colour varies from salmon pink to blood red and is dependent upon variety. They have a white butt at the base where the stalks were attached to the root system. The inside of the stalks are white and fleshy. The microbiological, chemical qualities of forced rhubarb contain oxalic acid, calcium in the form of calcium oxalate and plant oestrogen. Forced Rhubarb’s colour is enhanced by the technical process which also results in a gossamer skin with white inside flesh. When cooked, forced rhubarb is very tender and the flavour is delicate and slightly acidic. The flavour is due to production techniques and traditional local natural feeds including shoddy, which is specific to the area.

New forcing roots are obtained from propagating or splitting from our own reserves, the resulting new plants are called ‘rhubarb sets’. Root stock has been handed down within families for generations or purchased from other growers. The only way to get new stock is from roots that have been split from a parent plant, as growing rhubarb from seed although possible, cannot give a guaranteed pure untainted strain due to cross pollination. Only by splitting the roots from current stock can the purity of strain be ensured but requires significant experience to select out deviations from strains or diseased plants. The root stock itself is split into the respective varieties which are kept in separate fields.

Roots purchased outside the Rhubarb Triangle must have been grown within the Triangle for a minimum 2-3 preparative year prior to forcing, so that the root has the benefit of the specific soil and climatic conditions so beneficial to root development. The roots are taken from the field, and are loaded carefully by hand onto trailers for shipment from field to forcing shed, each driver recording his loads and field of source that the roots have come from that day.

The forcing varieties that are currently used in the Triangle are:

Timperley Early, Stockbridge Harbinger, Reeds Early Superb/Fenton’s Special (regarded as the same), Prince Albert, Stockbridge Arrow and Queen Victoria. This list is not exhaustive and other varieties may be used in the future.