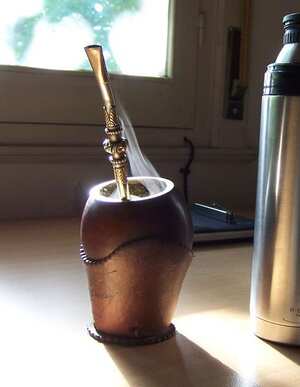 The yerba mate plant is a shrub or small tree growing up to 15 meters tall. The leaves are evergreen, 7–11 cm long and 3–5.5 cm wide, with a serrated margin. The flowers are small, greenish-white, with four petals. The fruit is a red drupe 4–6 mm diameter.

The infusion called mate is prepared by steeping dry leaves (and twigs) of yerba mate in hot water, rather than in boiling water like black tea. It is a slightly more potent stimulant than coffee and much gentler on the stomach. Drinking mate with friends from a shared hollow gourd (also called a mate or guampa in Spanish, or cabaça or cuia in Portuguese) with a metal straw (a bombilla in Spanish, bomba or canudo in Portuguese) is an extremely common social practice in Argentina, Uruguay, Paraguay, southern Chile, eastern Bolivia and Southern Region, Brazil and also Syria, Lebanon and Jordan.

The flavour of brewed yerba mate is strongly vegetal, herbal, and grassy, reminiscent of some varieties of green tea. Many consider the flavour to be very agreeable, but it is generally bitter if steeped in boiling water, so it is made using hot but not boiling water. Unlike most teas, it does not become bitter and astringent when steeped for extended periods, and the leaves may be infused several times. Additionally, one can purchase flavoured maté in many varieties.

In Brazil, a toasted version of mate, known as chá mate or "mate tea", is sold in teabag and loose form, and served, sweetened, in specialised shops, either hot or iced with fruit juice or milk. An iced, sweetened version of toasted mate is sold as a non carbonated soft drink, with or without fruit flavouring. The toasted variety of mate has less of a bitter flavour and more of a spicy fragrance. It is more popular in the coastal cities of Brazil, as opposed to the far southern states where it is consumed in the traditional way (green, drunk with a silver straw from a shared gourd).

Similarly, a form of mate is sold in Argentina, Uruguay and Paraguay in tea bags to be drunk in a similar way to tea. This is known in Spanish as mate cocido or cocido. In Argentina this is commonly drunk with breakfast or as part of merienda (roughly, afternoon tea), often with a selection of facturas (sweet pastries). It is also made by heating yerba in water and straining it as it cools.

In Paraguay, yerba mate is also drunk as a cold beverage. Usually drunk out of a cow's horn in the countryside, tereré, as it is known in the Guaraní language, is served with cold or iced water. Medicinal herbs, known as "yuyos", are mixed in a mortar and pestle and added to the water for taste or medicinal reasons. Tereré consumed in Paraguay may also be made as an infusion of yerba mate with grapefruit or lemon juice.