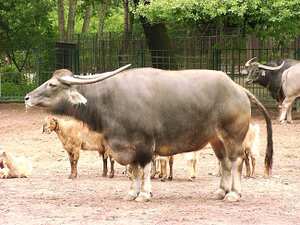 The Water Buffalo or domestic Asian water buffalo (Bubalus bubalis) is a large bovine animal, frequently used as livestock in Asia, and also widely in South America, southern Europe, north Africa and elsewhere. In 2000, the United Nations Food and Agriculture Organization estimated that there were approximately 158 million water buffalo in the world and that 97% of them (approximately 153 million animals) were in Asia. There are established feral populations in northern Australia but the dwindling true wild populations are thought to survive in India, Nepal, Bhutan and Thailand. All the domestic varieties and breeds descend from one common ancestor, the wild Asian water buffalo, which is now an endangered species. Buffalo, are used as draft, meat and dairy animals.

Europe and the Middle East

Introduced into North Africa and the Near East by 600 AD, the water buffalo was brought to Europe with returning Crusaders in the Middle Ages, and herds can be found in Bulgaria, Romania and Italy. As in Asia, buffalo of the Middle East and Europe live on coarse vegetation on the marginal land traditionally available to peasants. They are an economic asset by serving as a protein source, draft animal, and storage of family or household wealth. In some areas, they also provide occasional recreation at annual racing festivals. These buffalo are mostly river buffalo; due to genetic isolation, they have adopted a distinct appearance. Buffalo milk is used for the production of buffalo mozzarella in Campania and many other locations around the world.

Water buffalo are a traditional farm animal in Egypt, which has a large number of them. They are used as the main source of red meat in Egypt. Cows have been introduced in modern farms, yet water buffalo remain as the more widespread type of cattle in Egypt.

How much does one cup of buffalo meat weigh?