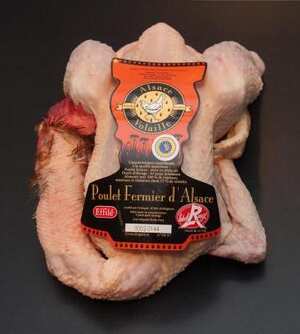 Geographical area : The region of Alsace in France

Evidence of origin : All of the links in the network are listed (hatcheries, food producers, breeders, abattoirs). Documentary records are kept for every batch of poultry : declaration by the breeder of birds added to his stock, delivery slips for day old chicks, declaration of departure for the abattoir and receipts for collection of carcasses from the abattoir, declaration of the labels used for the poultry after slaughter and declaration of downgraded poultry. The labels are all numbered. Checks on the consistency of the above information mean that the origin of the product can always be traced.

Acquisition : Pure or crossbred slow-growing stock; reared in the open air; cereal-based feed and minimum age set for slaughter of each type, close to sexual maturity; carcasses graded at the abattoir.

Link : The link with the geographical origin of the product derives from the following factors:

Historical reputation: Poultry-breeding was particularly important in the 19th century, and there is documentary evidence of Alsace poultry being used in local cuisine and figuring in commercial exchanges with the Parisian region. At the start of the century, all of the region's farms were still producing poultry.

Present reputation: Poultry production in Alsace is known by the local term of Wantzenauermichtkrätzerle. Reputation has led to its being marketed in other European countries. The award of the Red Label testified to the superior quality of the products and served as a means of consolidating their reputation.

Gastronomy : The IGP Volailles d'Alsace fowl can be conserved in the refrigerator for a few days, wrapped into the purchasing paper and stored in the coldest compartment. The IGP Volailles d'Alsace are always important second courses. These fowls, in line with the French culinary tradition, are almost always cooked with elaborated recipes, stuffed with ingredients rich of flavours and with the addition of refined sauces.