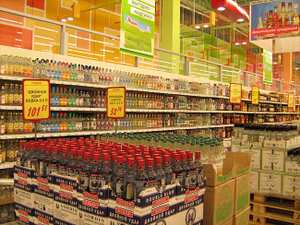 A small selection of vodkas

Vodka is one of the world's most popular distilled beverages. It is a clear liquid containing water and ethanol purified by distillation — often multiple distillation — from a fermented substance such as potatoes, grain (usually rye or wheat) or sugar beet molasses, and an insignificant amount of other substances such as flavourings.

Vodka usually has an alcohol content of 35% to 50% by volume. The classic Polish, Lithuanian and Russian vodka is 40% (80 proof). This can be attributed to the Russian standards for vodka production introduced in 1894 by Alexander III. According to the Vodka Museum in Moscow, Dmitri Mendeleev, a Russian chemist, found the perfect percentage to be 38. However, since spirits in his time were taxed on their strength, the percentage was rounded up to 40 to simplify the tax computation. At strengths less than this, Vodka drunk neat (without ice and not mixed with other liquids) can taste "watery": above this strength, the taste of Vodka can have more "burn".

Although Vodka is traditionally drunk neat in the Eastern European and Nordic countries of the "Vodka Belt", its popularity elsewhere owes much to its usefulness in cocktails and other mixed drinks, such as the Bloody Mary, the Screwdriver, the vodka tonic, vodka martini and most recently vodka red bull.