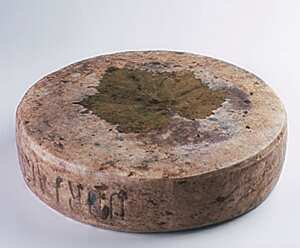 Ubriaco is a pasteurised cows’ milk cheese literally meaning ‘drunken’ cheese. This is because the rind is washed in red wine. It is produced in the province of Treviso and is also known as Formaio Embriago in the local dialect.

Similar in style to Cheddar, the cheese has a distinctive purple-ish rind and a straw-yellow, dense interior. It has a sharper flavour than Cheddar and a spicier after-taste. It can be identified by the white impression of ‘SELVA’ on its perimeter and a vine leaf on the top.

If the Ubriaco cheese is not listed below, select a similar type of cheese from the list below to get a rough idea for the number of calories in Ubriaco cheese.