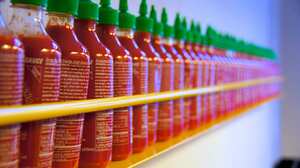 A line of Sriracha "Rooster" sauce 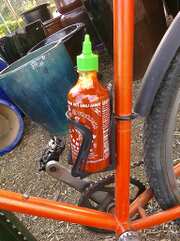 Sriracha (Thai: ศรีราชา, [sǐː.rāː.tɕʰāː] ( listen)) is a type of hot sauce or chili sauce made from a paste of chili peppers, distilled vinegar, garlic, sugar, and salt. It is named after the coastal city of Si Racha, in Chonburi Province of eastern Thailand, where it was possibly first produced for dishes served at local seafood restaurants.

In Thailand, sriracha is frequently used as a dipping sauce, particularly for seafood. In Vietnamese cuisine, sriracha appears as a condiment for phở, fried noodles, a topping for spring rolls (chả giò), and in sauces.

Sriracha sauce is also eaten on soup, eggs and burgers. Jams, lollipops, and cocktails have all been made using the sauce, and sriracha-flavored potato chips have been marketed.

In Thailand the sauce is most often called sot Siracha (Thai: ซอสศรีราชา) and only sometimes nam phrik Siracha (Thai: น้ำพริกศรีราชา). Traditional Thai sriracha sauce tends to be tangier in taste, and runnier in texture than non-Thai versions.

In a Bon Appétit magazine interview, US Asian-foods distributor, Eastland Food Corporation, asserted that the Thai brand of hot sauce, Sriraja Panich, which Eastland distributes, is the original "sriracha sauce" and was created in Si Racha, Thailand, in the 1930s from the recipe of a housewife named Thanom Chakkapak.

Within the United States, sriracha sauce is most commonly associated with the version produced by Huy Fong Foods, colloquially known as "rooster sauce" or "cock sauce" due to the image of a rooster on the bottle.

Various restaurants in the US, including Applebee's, P.F. Chang's, Subway, White Castle, and Gordon Biersch, have incorporated sriracha into their dishes, sometimes mixing it with mayonnaise or into dipping sauces.