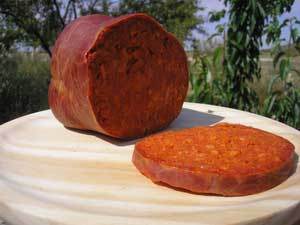 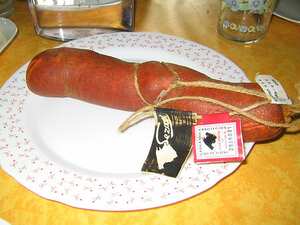 Sobrasada de Mallorca is a raw cured sausage from the island of Mallorca, made with selected pork meat which is chopped and seasoned with salt, paprika and black pepper. The sausage is encased in skins and matured slowly and carefully using methods which have been passed down from generation to generation.

The first mention of sobrasada was found in a Sicilian document dated 1403, which describes it as an item of food. This could put Italy as being the possible origin of the name but it would bear little relation to the present sobrasada, because paprika was not brought to Europe until after the conquest of Latin America.

The first mention of the sausage as we know it appears in the seventeenth century. It is mentioned that they were stored in a cupboard ‘sobrassades cent trenta llangonisses ...’ (one hundred and thirty sobrasada sausages ...) and during the same period there are multiple references to the consumption of pork and its derivatives, and the festivities that existed during the ‘matances‘ (pig slaughter, in winter). From the seventeenth century, we find many references to the use of sobrasada, in island cuisine, as becoming a major gastronomic feature.

In the twentieth century processors incorporated new equipment and technology to produce the sobrasada to ensure product quality, while retaining the characteristics and typical appearance of traditionally produced sobrasada. In late 1993, the Government of the Balearic Islands recognised the specific name of ‘Sobrasada de Mallorca’, and in early 1996, the European Union protected its name with IGP status and the contents of the sausage must be as follows:

The use of dyes is expressly prohibited

The casings may be natural or collagen fibre

With these ingredients and following the process specified in the rules of the IGP, you get a sobrasada of the highest quality, keeping intact the traditional aspects that characterise and differentiate it from other sausages.

The manufacturing process consists of two distinct phases. The first is the preparation of the sausage itself, which in turn consists of chopping the meat, mixing them with other ingredients and putting the sausage into casings, and a second phase, during which the maturation and drying of the product occurs.

Chopping of the meat is done mechanically with a mincer in order to achieve pieces less than 6 mm (usually between 3 and 5 mm in diameter). Then the meat is mixed with spices and salt. The mixture is stuffed into casings and then dried, with controlled temperature and humidity which provide the sobrasada with its unique aroma, flavour, texture and colour. It has an irregular cylindrical shape, a dark red surface (smooth or slightly rough) and a delicate look of cut red marble. The texture is sticky, oily and granular with a strong paprika flavour.