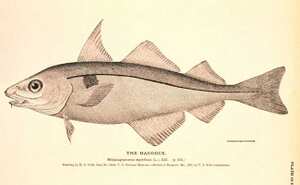 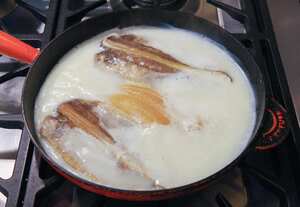 The haddock or offshore hake is a marine fish distributed on both sides of the North Atlantic. Haddock is a very popular food fish, sold fresh, smoked, frozen, dried, or to a small extent canned. Haddock, along with cod and plaice, is one of the most popular fish used in British fish and chips.

The haddock is easily recognised by a black lateral line running along its white side, (not to be confused with pollock which has the reverse), ie white line on black side, and a distinctive dark blotch above the pectoral fin, often described as a "thumbprint" or even the "Devil's thumbprint" or "St. Peter's mark".

Fresh haddock has a fine white flesh and can be cooked in the same ways as cod. Freshness of a haddock fillet can be determined by how well it holds together, as a fresh one will be firm; also, fillets should be translucent, while older fillets turn a chalky hue. Young, fresh haddock and cod fillets are often sold as scrod in Boston, Massachusetts; this refers to the size of the fish which have a variety of sizes, i.e. scrod, markets, and cows. Haddock is the predominant fish of choice in Scotland in a fish supper. It is also the main ingredient of Norwegian fish balls (fiskeboller).

Unlike the related cod, haddock does not salt well and is often preserved by drying and smoking. One form of smoked haddock is Finnan Haddie, named for the fishing village of Finnan or Findon, Scotland, where it was originally cold-smoked over peat. Finnan haddie is often served poached in milk for breakfast. Smoked haddock naturally has an off-white colour; it is very often dyed yellow, as are other smoked fish. Smoked haddock is the essential ingredient in the Anglo-Indian dish kedgeree.

The town of Arbroath on the east coast of Scotland produces the Arbroath Smokie. This is a hot-smoked haddock which requires no further cooking before eating.

How much does one cup of haddock weigh?

Haddock is at its best and in season during the following months: June, July, August, September, October, November, December, January & February.