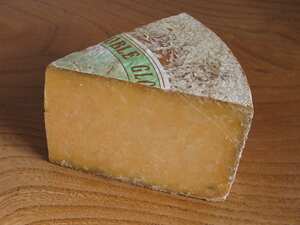 Smart's Double Gloucester is produced by the Smart family of Churcham in Gloucestershire using unpasteurised cows' milk and vegetarian rennet. This is made from full cream milk from both the morning and evening milkings, with annatto (traditional dye). With a natural rind, it is aged for a minimum of 6 months and has been described by The Real Cheese Companion as: "Rich, mellow, powerful, earthy, almost smoky", "the texture is slightly crumblier than Cheddar". Whole cheeses are produced weighing 3.4kg, 1.5kg and .34kg.

Double Gloucester is a traditional, hard cheese which has been made in Gloucestershire since the 16th century. At one time the cheeses were made only with the milk from Gloucester cows, which became almost extinct, although there has been a revival.

Smart's Double Gloucester can be consumed as part of a cheeseboard, with pickles or used in cooking.