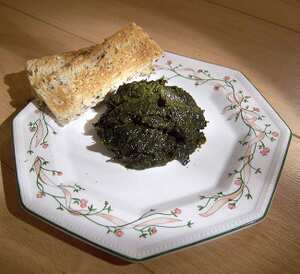 Laver is an edible seaweed that has a high mineral salt content, particularly iodine and iron. It is used for making laverbread, a traditional Welsh dish. Laver is common around the west coast of Britain and east coast of Ireland along the Irish Sea. Laver is unique among seaweeds because it is only one cell thick. It is smooth and fine, often clinging to rocks. The principal variety is purple laver (Porphyra laciniata/Porphyra umbilicalis). This tends to be a brownish colour, but boils down to a dark green pulp when prepared. The high iodine content gives the seaweed a distinctive flavour in common with olives and oysters.

Ulva lactuca, also known as Sea lettuce, is occasionally eaten as green laver, which is regarded as inferior to the purple laver.

Laver cultivation as food is thought to be very ancient, though the first mention was in Camdenâs Britannica in the early 17th century. It is plucked from the rocks and given a preliminary rinse in clear water. The collected laver is repeatedly washed to remove sand and boiled for hours until it becomes a stiff green mush. In this state the laver can be preserved for about a week. Typically during the 18th century the mush was packed into a crock and sold as "Potted laver".

Cultivation of laver is typically associated with Wales, and is still gathered off the Pembroke coast, although similar farming methods are used in west coast of Scotland.

Laver can be eaten cold as a salad with lamb or mutton. A simple preparation is to heat the laver and to add butter and the juice of a lemon or Seville orange. Laver can be heated and served with boiled bacon. It is used to make the Welsh dish known as laverbread, which can be eaten with or without oatmeal.