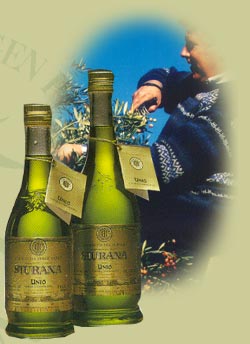 DOP Siurana is the result of an ancient oil production in the Camp de Tarragona (Spain) and a long history in the development of Reus as one of the main centres of Catalonian oil production. The production area is in two distinct regions: one is located in the Montsant mountains and another is east of the previous one, which coincides with the region of Camp de Tarragona. The olive varieties accepted in the DOP are Arbequina, the Rojal and Morruda. Of these three, the Arbequina is considered the main one, as 90% of the olives from which oil is extracted must be of this variety.

Depending on when the olives are harvested, there can be two types of oil: one is fruity, from an early harvesting, which had a green colour, with a lot of body and slightly bitter, and other is sweet, the result of later harvesting, which produces a yellow, more fluid oil. Olive oil covered by the DOP only protects Siurana olive oils as extra virgin having an acidity of less than 0.5%.

The area of production comprises Alt Camp, Baix Camp, Baix Penedès, Conca de Barberà, Priorat, Ribera d'Ebre, Tarragonès in the province of Tarragona. It is sold in various sizes and distributed throughout Catalonia.