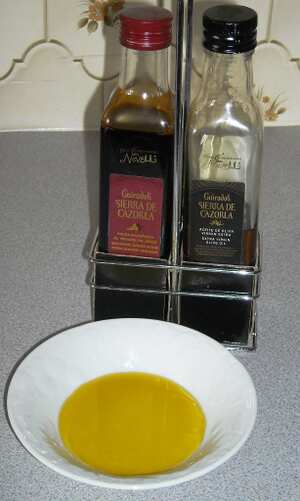 Description: Sierra de Cazorla is a DOP Spanish extra virgin olive oil, obtained from olives of the Picual and Royal indigenous varieties. Its characteristics are acidity: maximum 0,7°; peroxide number: maximum 18; K270: maximum 0,20; moisture and impurities: not exceeding 0,1 %. It is a highly stable olive oil, very fruity and slightly bitter. The colour from deep green to golden yellow, depending on the period in which the olives are harvested and the location of the olive groves within the region.

Geographical area: Location of the area: The production area is situated in the north-eastern part of the province of Jaen, an area rich in natural resources, close to the national park of Sierras de Cazorla, Segura and las Villas, with is own highly specific and biological features. Municipalities concerned: Cazorla, Chilluevar, Hinojares, Huesa, La Iruela, Peal de Becerro, Pozo Alcón, Quesada and Santo TomØ in the province of Jaen.

Method of production: In the autumn the land is ploughed with a cultivator and a disc plough. In the summer, the soil is prepared for the harvest by tilling and rolling and is treated with pre-emergence herbicides. Once the olives of the authorised varieties and from the registered olive groves have reached the correct degree of ripeness they are picked with the utmost care, those from the ground being separated from those from the tree. They are then taken to the oil mills in accordance with the requirements laid down to prevent damage to the fruit. At this point they are cleaned and washed to remove leaves, stalks, earth and impurities, and the oil is extracted by pressing,Â an operation which has to be completed no more than 48 hours after picking. Oil extraction is carried out under the supervision of the Consejo Regulador using appropriate and authorised techniques. The oil obtained is decanted, and the oil is analysed and classified. Only extra virgin olive oil is given the protection of the designation.

Background: The earliest records of olive growing in the region and in the Sierra de Cazorla, dating back to after the re-conquest and re-population under Ferdinand III in the 13th century, are to be found in the archives of the late Middle Ages of the town of Quesada. These documents are proof that olive cultivation was already practised in the region at that time.

Natural conditions: The geographical production area has very specific physical and biological features which contribute to the oil produced in this area having its own distinct quality characteristics. One of the main factors bearing out the link with the natural environment is the use of the indigenous Royal variety, which is fully adapted to the soil and climate of the area and which produces low yield but high-quality oil. The area is mostly hilly, with some hills rising to high peaks. The Sierra de Cazorla is made up of four almost parallel mountain ranges, stretching along a longitudinal axis from north to south and with folds from east to west. One of the highest summits, the Cerro de Las Empanadas, rises to 2,106 m. Â The soils belong to the following orders: Entisols (the most recent and having evolved the least), Inceptisols (developed over limestone and alkaline in nature) and Alfisols (with clay-enriched horizons). Average seasonal temperatures are as follows: spring 16 °C, summer 23 °C, autumn 13 °C and winter 4 °C; annual average rainfall ranges between 600 and 800 mm.