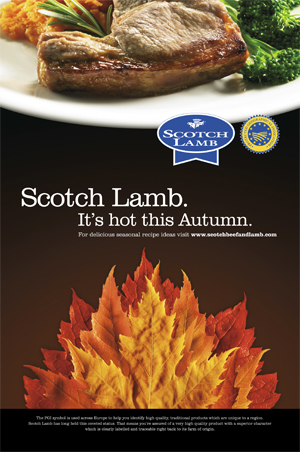 At least since the turn of the century, Scotch lamb has enjoyed a reputation for eating qualities based on freshness, flavour and tenderness. These qualities are attributed to the extensive systems of farming based on grass feeding which predominate in Scotland. The sheep breeds have been developed for meat production (rather than milk or wool) and these farming systems are matched to an efficient processing sector which ensures the lamb is marketed in an optimum condition.

After slaughter and dressing the lamb may be marketed as a whole carcass or the carcass may be broken down into cuts of lamb. Typically presentations of the product may be described as follows:-

The unique worldwide reputation and qualities enjoyed by Scotch lamb come from traditional feeding on abundant grazing attributable in large part to the Scottish climate. Scotch Lamb continues to be marketed in the traditional way - sold as fresh carcases or cuts. The meat sector has always played an important role in the economy of Scotland and it provides employment for a significant number of people. There is therefore a high level of commitment to maintaining the reputation of Scotch meat and to meet growing consumer demand for Scotch lamb. This has led the industry to initiate quality assurance schemes which are aimed at selecting superior carcases which have been produced, dressed and cut by fully trained people.

Each farmer controls his own flock of sheep and lambs are sold for slaughter when they reach a suitable stage of finishing. The lambs may be sold on a deadweight and grade contract or by auction. In each case the producer is required to certify that the lambs were finished in Scotland for a period of not less than 2 months as required by the Commission Regulation on determining the origin of the meat and offal, fresh, chilled or frozen of certain domestic animals. Abattoirs are required to maintain records to ensure traceability of each lot purchased. The lambs are slaughtered and subsequently dressed in accordance with the relevant specification defined in the Standard Conditions for Deadweight Purchase of Cattle, Sheep and Pigs - published by the Meat and Livestock Commission (MLC). The slaughter number, the date of slaughter, the classification details and the cold weight of the carcass is recorded on the carcass or on a label attached to it. After dressing the carcases are transferred to a temperature controlled environment where they are held until they are dispatched to customers or transferred to a cutting area for breaking down into cuts.

If the carcases are to be divided into cuts, the cuts will be prepared and packaged in accordance with customer requirements. After which they will be held in a temperature controlled environment until despatch to customers.