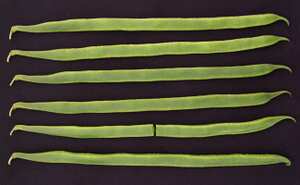 Green beans (American English), French beans or runner beans (British English), also called squeaky beans, are the unripe fruit of any kind of bean, including the yardlong bean, the hyacinth bean, the winged bean, and especially the common bean (Phaseolus vulgaris), whose pods are also usually called string beans in the northeastern United States, but can also go by snap beans. Varieties have been bred especially for the quality of the flesh, flavour, or sweetness of their pods. Smaller bean pods are often referred to by the French name haricots verts.

The first "stringless" bean was bred in 1894 by Calvin Keeney, called the "father of the stringless bean." Keeney worked in Le Roy, New York.

Green beans are of nearly universal distribution. They are marketed canned, frozen and fresh. A dish with green beans popular in the southern United States, particularly at Thanksgiving, is green bean casserole. Some restaurants in the USA serve green beans that are battered and fried. Green beans are also sold dried. They are rich in vitamin C.

How to cook string beans in a pressure cooker

Runner Beans are at their best and in season during the following months: July & August

Runner Beans are at their best and in season during the following months: June, July, August & September