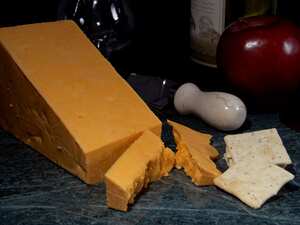 Red Leicester is made in a similar manner to Cheddar cheese, although it is crumblier; it is coloured orange by adding annatto extract during manufacture.

Red Leicester is a cows' milk cheese, originally from Leicestershire, and is named after the city of Leicester. It has a firm texture, which makes it suitable for grating, and it is a good choice for use in cheese on toast or with a baked potato. The taste compliments fruit, pasta, and crackers and is often used in tarts or quiches. At its best, it has a slightly nutty taste.

The rind is reddish-orange with a powdery mould on it. Although Red Leicester can be young or "old", aged anywhere from 4-9 months, the young Leicesters at the start of that range will be very mild: they often require at least six months to develop a tang. Farmhouse versions are also available. Farmhouse makers will mature it in cloth, the old way, to allow better flavour development.